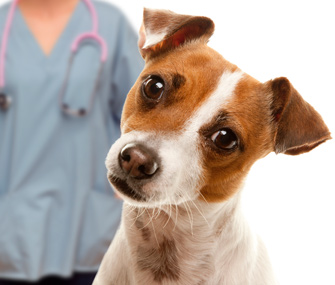 As the man pulled off his shirt and draped it over his dog, I remember thinking, “I hope my technician comes in right about now. No, wait. I don’t.” The appointment had been uneventful until I informed the dog’s owner that his dog had a heart murmur. The man replied, “If you think he’s got a heart murmur, listen to this!” and off came his shirt.

While the request was odd, I have to admit I was intrigued. It turned out the man did indeed have a much more impressive heart murmur than his dog. In fact, he was just a week away from surgery to have the heart defect corrected.

As he retrieved his shirt and his dog, I couldn’t help but notice a look of almost paternal pride on the man’s face. It was as if he was considering his dog’s mild heart abnormality and thinking, “Yep, that’s my boy.”

While I’m glad that I got a chance to bring this little family closer, the incident did cause me to stop and consider some of the more unusual interactions between pet owners and veterinarians.

As a profession, veterinary medicine is one in which we are used to going to great lengths to meet the needs of the families we serve. Being asked to make a house call, visit a sick patient outside in the owner’s car or stay past closing time are all quite common in our line of work.

Still, even in this business, while we strive to make pets and their people as happy as possible, there are some requests that strike us as a bit much. On my Facebook page, I asked veterinary professionals to tell me some of the most bizarre requests they’ve gotten from pet owners. Here’s what they reported.

And that’s just the tip of the iceberg. See the complete list of more than 500 submissions on Dr. Andy Roark’s Facebook page.