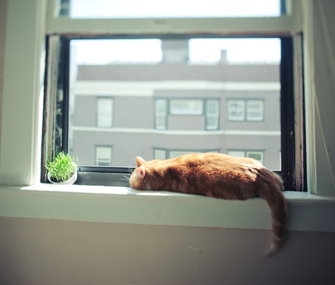 As a veterinary oncologist, I meet many vigilant pet owners who want to know how they can keep their pets healthy and identify cancer early. Based on my professional experience, I've compiled five facts about skin cancer and pets that are sure to surprise you.

1. Pets Get Skin Cancer, Too


2. The Skin Cancer That's Common in Pets — But Not People

Mast cells play a role in allergic responses — they are responsible for the itching, swelling and redness in your skin when you come in contact with an allergen. In dogs, the most common malignant skin tumor is the mast cell tumor. Although dogs and cats who suffer from allergies are not more prone to developing mast cell skin tumors, certain breeds of dogs — including LabradorRetrievers, Boxers, Pugs and Golden Retrievers — are predisposed to developing this type of tumor.


All pet owners need to be vigilant about unusual skin masses, but any dog owner should be especially concerned about raised, hairless, pinkish-yellow masses, which could be mast cell tumors. Pugs are especially prone to simultaneously developing multiple mast cell tumors — sometimes as many four or five pinhead-sized masses in various locations on their bodies. Lucky for these popular dogs, the tumors can be removed successfully via surgery.

Mast cell tumors in cats look very similar to those in dogs. Because mast cells induce itching, swelling and redness, mast cell tumors may be red, itchy and periodically swell up and then disappear only to return again a few days later. This often confuses pet owners, who think because the mass disappears it can’t possibly be cancer.

3. Treatments for Melanoma of the Mouth

Our own doctors see every freckle as a potential melanoma. Melanoma also occurs frequently in dogs, but much less so in cats. Melanomas of the haired skin in dogs are usually benign — the bad ones occur in the mouth, on the gums and where the nails meet the toes. In any case, if detected early, veterinarians can now treat melanoma with a vaccine coupled with surgery or radiation therapy. And while orange cats frequently develop freckles on their lips and gums, these flat accumulations of pigment are normal and are known as lentigo simplex.


4. Sunbathing is Also Bad for Your Pet

For the most part, our pets have dense fur that acts as a natural sunscreen, but white-coated dogs and cats are the exceptions to this rule: In sunny parts of the country where pets spend a lot of time outside, like California and Colorado, sun exposure takes a toll on the thinly furred skin on the ears and nose of white dogs and cats. Dogs who sunbathe on their backs are also prone to developing squamous cell carcinoma in the thinly haired region of the tummy. Solar-induced squamous cell carcinoma can be treated with surgery or radiation therapy if found early, but prevention is simple: Limit your pet’s exposure to the sun or consider some dog- and cat- safe sun protection.

5. Needles Can Sometimes Do More Than Prick

A rare but important tumor that afflicts cats sometimes forms at the site of a subcutaneous injection. The injection induces inflammation that, for some unknown reason, transforms into a malignancy. Millions of cats get injections, but only a few develop these tumors, which are known as injection-site sarcomas.Why some cats do and others don’t is a frustrating conundrum for cat owners and veterinarians.

About 15 years ago, a group of experts in the field developed a guideline called 3-2-1 for the management of lumps at injections sites. The guideline advises that if a lump is present three months after an injection and is larger than two centimeters or is growing just a month after an injection, it should bebiopsied to determine if it is a benign or a malignant mass.

Of course, this article is just a quick look at skin cancer in dogs and cats is only scratching the surface of this important disease. If you find a lump or sore anywhere on your pet’s skin, see your veterinarian as soon as possible.

Dr. Ann Hohenhaus, a practicing veterinarian for 30 years, is board-certified in both oncology and internal medicine. She maintains her clinical practice at The Animal Medical Center in New York City, providing primary care to her long-term patients and specialty care to pets with cancer and blood disorders.