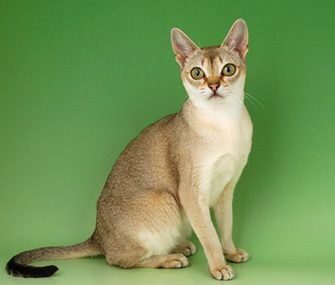 Alan Robinson, Animal Photography
The Pura, as he's nicknamed, is considered a national treasure in his native Singapore.

The Singapura is said to have originated on the streets of Singapore, where he is considered a national treasure. In fact, he was once even the Singapore Tourism Board’s national mascot. Learn more about the Pura, as he’s nicknamed, and whether he might be the right breed for you.

They’re known for their good looks.

The Singapura stands out for his large ears, small size, muscular body and black-tipped tail. He comes in one color, brown ticked agouti, which is described as dark brown ticking against a yellowish ivory background.

Typically a playful, fun-loving feline, the Singapura usually enjoys chasing after toys and turning things like pens and computer keyboards into his playthings.

The Singapura can typically get along with just about everyone, including children, friendly dogs and other cats.

They’re the smallest of the domestic cats.

Typically weighing in at only five to eight pounds, the Singapura is the tiniest cat breed. But don't be fooled by his small size — he's capable of leaping to high places, including your shoulder.

The inquisitive Singapura doesn’t typically miss much — he tends to be intelligent and can often be found observing what’s going on around him.