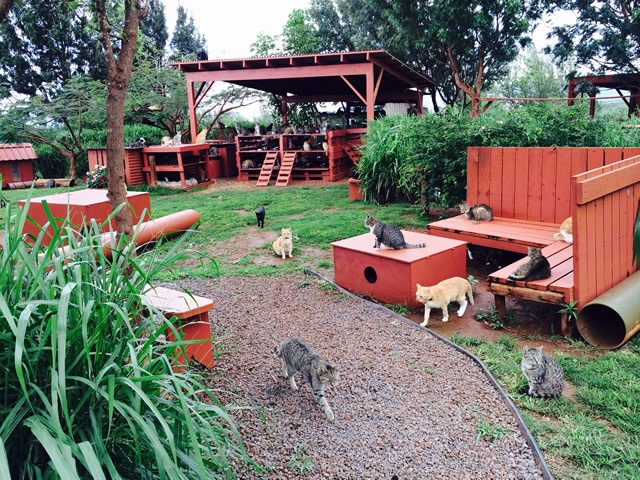 Courtesy of L.A.R.C.
The Lāna‘i Animal Rescue Center is a unique open-air cat sanctuary on the Hawaiian island of Lāna‘i.

When planning your Hawaiian vacation, you might want to snorkel, see volcanoes, maybe attend a luau. Oh, and if you’re stopping on the island ofLāna‘i, you’re going to want tocarve out time to pet some cats.

No, really — just check Trip Advisor. Lāna‘iAnimal Rescue Center (L.A.R.C.), founded in 2008, is a top-rated attraction (currently No. 2) on the small island, and it’s no fluke.

Located just outsideLāna‘iCity, L.A.R.C. is an open-air cat sanctuary that’s home to some 340 cats.Lāna‘ihas very few predatory species — not even the mongooseyou’llfindon other Hawaiian islands — and there’s no full-time veterinarian. Several years ago, the island’s feral cat population had gotten out of control. That’s when Kathy Carroll stepped in. 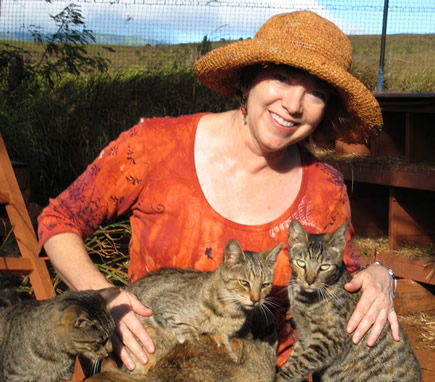 She and her husband, Mike (who owns an art gallery, which is the current No. 1 attraction on the island;the two attractions swap positions now and again), moved toLāna‘ifromChicago after celebrating their 20th anniversary at one of the FourSeasons resorts on the island. (Both resorts now support L.A.R.C. with a voluntourism campaign called the Kokua Project, which encourages guests to visit the sanctuary.) Ten years ago, a woman brought Carroll, who was an animal lover but not necessarily an activist, a kitten who would change her life.

“A friend brought him to me before leaving for a flight and said she wasn’t sure what would happen if she left him. He was a little baby kitten that was a bag of desperation. We’ve all seen it — anyone in animal rescue has seen it — he was very malnourished, had an injured leg, fleas. He was just a mess,” Carroll says. The local vet wouldn’t be back for a week, and Carroll knew she needed to take action.

“I took the ferry to Maui, got a rental car and found a veterinarian,” she says. “The kitten is fine now, but he was the catalyst — he opened my eyes to the plight of homeless cats and kittens here onLāna‘i.”

When she brought the kitten back to the vet to be neutered a month later, she began to learn more about the issue. At that time,Lāna‘ihad a beloved but part-time vet,DocPalumbo, for three hours a week, and there were no local programs for spaying and neutering strays. The Maui-based vet suggested she get in touch with the Feline Foundation of Maui, which could lend her traps and teach her how to start a trap-neuter-return (TNR) program onLāna‘i.