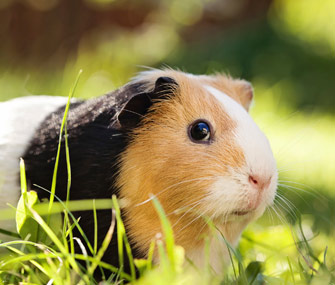 The guinea pig is no ordinary pocket pet. Able to talk and dance their way into your heart in a single bound, these rascally rodents are overlooked at great cost to your household cuteness quotient. Allow us to point out a few things about the captivating cavy that just might make you consider adding one to your menagerie.

You might as well hand over the tiny top hat and taps to this little creature — guinea pigs are light on their feet and are often observed enthusiastically bopping around their cage during waking hours.

When they’re happy or excited, there’s nothing like a good popcorning session to get a guinea pig’s blood pumping. Judi Lanier, founder of Metropolitan Guinea Pig Rescue and seasoned observer of guinea pig behavior, describes the action thusly: “When they’re very happy they tend to run, and all of a sudden they’ll jump up, flip around or shake their bodies around.”

Peanut, a 3-year-old brown, white and black American guinea pig, takes her popcorning to a whole new level, says owner Nicole Fetterman. “Sometimes, Peanut jumps on top of her little igloo in her cage and just starts looking around," she says. "I’m pretty sure it’s a ‘bird’s-eye view’ to her.”

When startled, guinea pigs will “freeze,” staying completely still until danger has passed. Surprisingly, they’re able to learn and remember, too — guinea pigs can navigate a path to food and in a few cases are able to be litterbox trained, according to Lanier.

In her role as leader of her 4-H club’s Cavy Corner group, 12-year-old Fetterman has also noted the animal’s chatty nature. “They make cute, funny noises and are very interesting to learn about," she says.

Indeed, humans have observed and recorded almost a dozen distinct guinea pig sounds, potentially indicating everything from happiness to hunger, loneliness and anger. “They’re quite verbal and they make different noises depending on how they feel,” Lanier says. Upon recognizing their owners, many guinea pigs will whistle with delight or, during a warm cuddle session, they’ll quietly purr like a kitten.