You can't enter a grocery store or restaurant these days without noticing the booming popularity of gluten-free foods. What started as a medical necessity for some has flourished into the newest diet trend — and we bet you know someone who's gone gluten free.

Gluten is the protein in wheat, barley and rye. People cut it out of their diets for many reasons; some think it’s a healthier option, while others have varying levels of sensitivity to it that can result in stomach upset and abdominal pain. 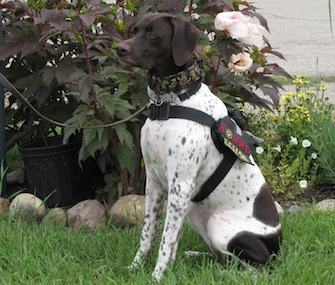 Courtesy of Nosey Dog Detection
Willow, a German Shorthaired Pointer, has been trained to help her owner detect gluten.

But for the estimated 1 in 100 people worldwide who are diagnosed with celiac disease, an autoimmune disorder, staying away from gluten is a medical necessity. If a person with the disease ingests even a minute amount of gluten, they could suffer illness akin to food poisoning — and have long-term health effects, according to the Celiac Disease Foundation. The only treatment for celiac disease is following a strict gluten-free diet. Even ingesting trace amounts through cross-contamination can lead to an attack, and avoiding gluten is very challenging because it can be in anything from food to medicines.

The question now is can people with this disease benefit from a service dog? Some service dogs help people who are blind, deaf or have PTSD, and scent-detection dogs have been trained to sniff out diabetes and cancer. Have we reached a point where dogs can be trained to detect gluten, too?

Dawn Scheu of Michigan suffers from a particularly severe form of celiac disease. She was diagnosed five years ago and says it takes less than 10 parts per million of gluten to make her sick. But she says she’s been much healthier in the year since she started working with trainer Kathryn Watters to teach her dog to detect gluten.

Scheu, a former EMT who worked with search-and-rescue dogs, started working with Watters to train Willow, a young German Shorthaired Pointer, in September 2013. Scheu says Willow saved her from gluten for the first time last Christmas Eve. In a rush at the grocery store, she grabbed a box of crackers that she thought were gluten free. But she had inadvertently picked up the wrong box. When Scheu got home, Willow pawed at the back of her owner’s legs and then at the bag, and then Scheu realized her mistake.

Willow is considered a service dog, so she’s able to accompany Scheu into stores and restaurants. When she and her husband took Willow out to eat with them for the first time, they brought another special guest along to celebrate: Watters.

“When [Watters] met me, I looked like the walking dead, and now I have color in my face and my hair is better,” Scheu says. “I’ve only been glutenated once since I got Willow.” (Being glutenated means to be contaminated with gluten.)

That was when she was at a park with a group and stepped away from Willow to apply bug spray, which she didn’t know contained gluten. When she walked back to Willow, the dog indicated at her. It took Scheu a few minutes, but she realized the spray was the culprit and quickly went home to shower it off. She was sick for 10 weeks after that incident and had to be on steroids, but it could have been much worse if it weren’t for Willow.

Watters and Scheu believe Willow detects gluten with 95 to 98 percent accuracy, but they continue to work with her. 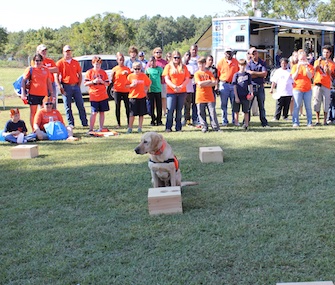 We talked with someone at the Celiac Disease Foundation to get the organization's take on the concept of gluten-detection dogs for people living with the disease. Its medical board’s consensus is that “there’s no research to either support or refute it,” says CEO Marilyn Grunzweig Geller. “There’s no protocol; there’s no scientific method” for training the dogs.

Then we talked with Dr. Paul Waggoner, a senior scientist of Canine Performance Sciences at Auburn University's College of Veterinary Medicine. Although the nationally renowned program hasn’t investigated gluten detection, Waggoner conducts research into many olfaction topics. He saw lots of potential in the idea. “I have no reason to think that it’s not feasible,” he says. “In principle, if you can identify the target that’s associated with the problem, then it’s feasible.”