These dogs are trained to help a witness feel comfortable in countless ways. A dog will sometimes go to the witness and lay his head in the person’s lap to comfort the witness. The dogs know games that children can play with them, including cards and hide-and-seek. Jones says Lincoln once kept two young girls busy and distracted in court for three days while they waited to take the stand.

And sometimes, just the dog’s presence is all it takes to make a difference.

“When we’ve had children who have become more emotional through their disclosure, Nanook will sometimes curl up a little tighter and a little closer to them,” Gevedon says. 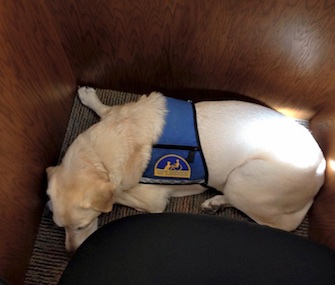 Cynthia Gevedon
Nanook, the Labrador Retriever, practices lying in a witness box in a mock courtroom at Michael's House.

If an attorney feels that the witness would do best on the stand with the dog in the courtroom, the attorney can make a motion to allow the dog. That’s the place where the biggest resistance to the dogs is usually met.

“There’s so much at risk at a trial — a person’s liberty depends on whether witnesses are able to give a full testimony there on the stand, whether the person is a witness for the state, the prosecution or the defense,” Dr. Walsensays. “Ifthey can’t stand up there or sit up there and give their testimony, the jury doesn’t get to hear everything they need to hear to make that determination of guilt or innocence."

“It’s always easier not to innovate, to do things the way you’ve always done… judges used to worry that the decorum of the courtroom would be disrupted by a dog,” Dr. Walsen says. “The judge doesn’t want to be overturned. He doesn’t want to lose a case on appeal, because he’s had something new in the courtroom.”

But for many judges, Dr. Walsen says, once they experience one of these working dogs, they are swayed.

She explains that the best practice is for the witness and the dog to be brought to the stand before the jury is in the courtroom. “Then the jury is brought in, the testimony is taken, the jury leaves and the witness goes out with the dog — and ideally the jury would never have that visual of the beautiful dog sitting with the child. Some jury boxes don’t allow for that, but the dog can almost always be made very inapparent. They just lie down on the ground. They might snore, but they don’t do anything cute,” she says.

Gevedon and Jones say judges in their areas have welcomed the dogs. The first judge to allow Nanook in his chambers for a competency hearing was happy to take a photo afterward to be posted on Facebook — as long as she promised to tag him in it. “He very much wanted to be able to say he was the first one in Ohio,” Gevedon says.


Benefits for the Staff, Too

Among the countless ways courthouse dogs offer solace is one that hits close to home for their handlers: They can help the rest of the staff they work with better cope with the difficult things they see and hear in their jobs.

“It can be a tremendous help for the professionals who are working with these types of crisis and trauma situations, day in and day out,” Gevedon says.

Jones finds the same with Lincoln.

“He’s just a happy, pretty, beautiful dog with a bubbly personality, who just brings joy into wherever he goes,” she says. “The stories that I heard waiting for Lincoln, I’ve now witnessed and been a part of, and it is a magical thing to have this tool for people who need it. … It’s really a special thing.”