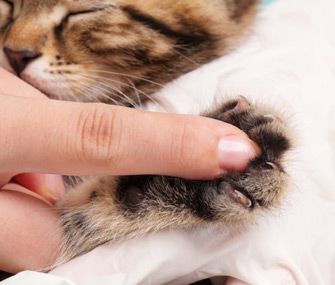 Thinkstock
Getting your kitten comfortable with having his paws handled can help prevent claw-trimming drama as he gets older.

As kittens grow, they discover all their fighting tools, including their nails. They also discover how much fun it is to climb furniture and bat at toys. But what they really need to discover is how to accept you cutting their nails so you can help protect them from the pain of overgrown nails and prevent damage to your furniture and flesh.

Kittens normally have their claws retracted so they have some control over whether they are scratching. But don't count on training your kitten to keep his claws retracted — you'll have better luck clipping his nails every few weeks.

Accustom your kitten to lying on his back in your lap facing you or in another position that is comfortable and calming for him. You can start when he's sleepy and give him some treats for remaining still for increasingly longer periods. Practice holding each paw in your hand, rewarding him for being cooperative. Then gently press on the tops of each toe until the claw is exposed. Again, give him treats for being good.

Finally, after several days (at least) of such practice, it's time to clip his first nail. For a kitten, you can use human fingernail clippers or small nail trimmers made for pets. Just make sure they're sharp, as dull clippers can crush the nail, which may be painful. For now, just cut off the very tip of each nail. Avoid the pinkish quick you can see within the nail. The quick contains both blood and nerve supplies to the nail, so be prepared for a bit of bleeding and protesting if you cut it. But don't panic. Stop the bleeding with some styptic powder, and if you don't have that, you can use flour or cornstarch. Make sure to apologize with treats and promises not to slip up again!

Give a treat after each nail and don't feel you have to cut them all this first time. It's better to stop before your kitten starts struggling than to push things to that point. Instead, give him a break and do a few more nails later. Just remember which ones you've already done! Cats have five toes (and five claws) per front foot and four toes (and four claws) per back foot — although polydactyl cats can have many more. One of the nails on each front paw is actually up on the wrist, so don't overlook it.

When your kitten learns early that nail trimming can be a positive and rewarding experience, he'll be more likely to cooperate with it later on in life. It's also important to provide your kitten with scratching posts or platforms so that he learns to sharpen his nails there, rather than on your furniture.