Home ›
Our Pet Experts ›
Kristen Seymour ›
From Shelter Pups to Show Dogs, Jorge Bendersky Sees the Supermodel in All Dogs

From Shelter Pups to Show Dogs, Jorge Bendersky Sees the Supermodel in All Dogs 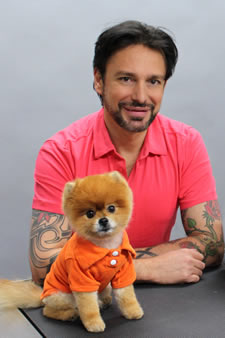 The words "celebrity dog groomer" might bring to mind a groomer primping the poshest pooches with fancy cuts as their rich and famous owners look on. But when we spoke with celebrity groomer Jorge Bendersky, he was rushing home to New York after teaching the basics of grooming to a group of 500 volunteers in San Diego who help with shelter pets. He was passionate, but far from fancy. Since appearing on Animal Planet's Groomer Has It six years ago, Bendersky has popped up as a judge on TLC's Extreme Poodles, on Animal Planet's Dogs 101 and on numerous national news and morning shows. He recently released his first book, DIY Dog Grooming, From Puppy Cuts to Best in Show: Everything You Need to Know, Step by Step. Despite his internationally recognized name, his book wasn't really aimed at the high-end crowd. He wrote it in part to help your average dog owner save money, but also to help adoptable animals find homes by giving shelter volunteers tips on making those animals look their best.

One Picture Saves a Life

"One of the forces behind writing the book was that I always had people asking me how they could help with shelters," Bendersky says. "Maybe they don't have a dog, but they want to help, and shelters always have such a need for people who know how to bathe a dog and know how to brush a dog."

In fact, this passion for shelter pets extends beyond the book and into his participation with the One Picture Saves a Life initiative. Bendersky, along with Seth Casteel (the photographer behind the book Underwater Dogs) and Jackson Galaxy (cat behaviorist and host of Animal Planet's My Cat From Hell), is hitting shelters around the nation to hold workshops where they teach volunteers about the importance of good photography in helping shelter animals find a home, along with tips on how to get those fantastic photos.

While teaching people to groom their dogs themselves was the major point of the book (and we have to say that he does a really nice job of explaining the techniques in ways true beginners can understand), Bendersky stresses that a huge part of grooming is just having some loving and positive interaction with your dog. "I wanted to explain how important it is that you dance with your dog," he says. "Hold him, and when you're calm, he's calm, and that makes him trust you."

When it comes to choosing a haircut for a dog, Bendersky takes it one dog at a time, rather than going by a picture of a haircut the owner likes or by what's fashionable. Still, if a client's mind is set, Bendersky takes his position as a service provider seriously. He's persuasive, but if the owner stands firm, he'll always defer to the client's request.

"I'm known for tailoring the haircut to the lifestyle. That way, the owner receives a cut that will work for what they do with their dog," he says. For example, a dog who hikes with his owner should have short enough fur for the owner to see whether he has gotten scratched. Plus, he'll stay a bit cleaner that way. But having an active lifestyle doesn't mean your dog can't still be stylish. "Sometimes I see a dog and I immediately think, 'Oh, he should have some feathering on the legs but a short coat to show off all his muscles.' Or I meet a Shih Tzu who's a little clown and I think, 'We've got to show off those eyes, maybe give him a mohawk.'

"Most people see babies when they look at their dogs," he says. "I see a supermodel." And he's always up for the challenge of helping them find their most glamorous selves.