How Your Dog Can Help You Make New Friends 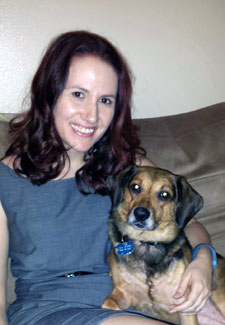 Courtesy of Gina D'Amico
Gina D'Amico and her dog, Ella, are both picky when it comes to making new friends, but frequent walks have helped them both develop long-lasting friendships in new cities.

Gina D'Amico and her dog, Ella, have been the new girls in town twice now. Between D'Amico's demanding career and the fact that Ella is choosy about companions, making new friends has been a concern both times. However, despite Ella's picky nature, she's actually been key to making close friends — of both the human and canine varieties.


"I think people, like dogs, are naturally friendly and want to meet new people but don't know quite how sometimes, especially once you leave college," D'Amico says. "Activities like trips to the dog park and regular walks around the neighborhood give humans and dogs a great conversation starter."

We can't help but think it would be easier if we could just meet like dogs do: a little play bow, a quick sniff of the butt and—voila! —pals. But the fact remains that meeting new people as an adult human can require a bit of effort. Fortunately D'Amico's experience isn't unusual. After all, it makes sense that if you and your dog meet other dogs and owners somewhere dog friendly, you're at least starting off with something in common. Of course, if your dog is going to be out making friends with other dogs, you need to make sure he is up to date on his vaccinations.

Whether you’ve found yourselves in a new town or you're simply looking to expand your social circle, we've got a few tips.

Do you always hit the dog park on certain days? Amble along the same route every day after work? Simply putting yourself (and your pup) out there among other dog owners can be a surprisingly effective way to socialize. If you commit to a set routine, it won't take long for a few faces to start looking familiar.


"When I moved to Gainesville, Florida, I made sure to visit the dog park, and everyone I met there was wonderful, as were their dogs. However, this was my first 'real' job and it kept me busy,” D’Amico says. But she worked near her apartment and came home regularly to walk Ella in her neighborhood. During one of these walks, D'Amico and Ella met a Miniature Schnauzer named Tucker. The dogs immediately hit it off.

D'Amico then got to know Tucker's owner, Adam, and learned that he was an attorney and a runner. "Adam invited me to Monday night dinners he hosted for friends. I would bring Ella over before and let her and Tucker play and wear each other out," she says. "It was definitely win-win." 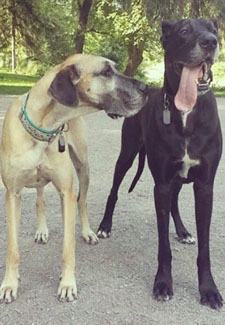 There are thousands of dog-related groups all over the country that can be helpful if your dog is comfortable around other dogs. An easy way to find one near you is through a service like Meetup or on Facebook. Some focus on events and play, others are dedicated to outdoor activities like hiking, but many are breed specific, which is how Cheryl Kuntz and her Great Dane, Bambi, came to be friends with many other Danes and their owners in the Buffalo, New York, area.

After adopting Bambi a year and a half ago, following a social media campaign sharing the dog’s sad start, Kuntz began to make friends with fellow Dane lovers who'd become invested in Bambi’s story.

Once Bambi was comfortable in her new home, Kuntz decided to take her to meet up with the Dane owners who’d been following Bambi’s progress. “At this point, it was three women in particular that I was going to meet up with, but it was during a monthly Great Dane meetup at Lasalle Dog Park in Buffalo. I’m so glad I went!”

They’ve since created a Facebook group called WNY Great Dane Meetups, where owners post when they’ll be at area dog parks. “I've been to the park [when] there have been 15 or more Danes there at one time!” Kuntz says. And she’s become close with the three women she met originally. Between the four of them, they have seven Danes and often get them together, but they occasionally have a “childless” evening.

Create Your Own Group

Buffy Snider of Littleton, Colorado, founded The Colorado Bernese Mountain Dog Meetup Group in 2011 to fill a need she and her then future husband saw when he became a first-time Berner owner in 2008. “We were looking for a way to socialize the puppy and meet people of the same mind, and there just wasn't anything out there that met our needs," she says. The group has since grown to more than 300 members, and many people new to the Colorado area seek them out to find like-minded people and dogs.