Home ›
Our Pet Experts ›
Mikkel Becker ›
Is Your Dog Ruining Your Love Life?

Is Your Dog Ruining Your Love Life? 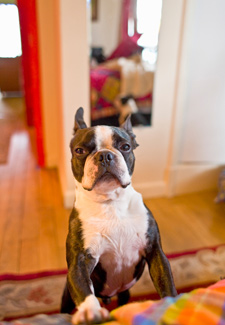 Thinkstock
Some dogs stare or bark at and try to break up physical interactions between people.

Whenever my dad, Dr. Marty Becker, and my mom, Teresa, tried to hug and kiss, my mom’s dog, Quixote, a Pomeranian mix, erupted into a fit of barking. As children, my little brother, Lex, and I didn’t mind Quixote breaking up my parents’ public display; it was embarrassing. But years later, when Lex and I invited our own significant others to our home, Quixote continued to act like a monitor at a high school dance, barking and howling if he saw kissing or hugging.

Fortunately, after a bit of training, Quixote quit policing the household.

Our experience wasn’t unique. I hear story after story about dogs being barriers to physical intimacy. Here's why they do it—and what to do about it.

Why Dogs Get in the Way

Some dogs are indifferent to physical interactions between people but others stare, bark or try to break up or get in the middle of things. And though sometimes this isn't a problem, many pet owners are looking for ways to keep their dogs from objecting.

So why do some dogs react so strongly? There are a number of possible reasons. First, closeness between people can confuse a dog. Hugs, for instance, are abnormal in the canine world and can be viewed by dogs as threatening. Dogs may also view intimacy as play, which means they want to play, too.

Then there’s the dog’s personality. Certain breeds, like herding and guard dogs, are likely to be on high alert and perceptive of even minute changes in the environment. These dogs may react to anything out of the ordinary or suspicious (like hugging, cuddling, kissing and more). Other dogs take on the job simply from lack of activity and a need for something to focus on. Finally, some dogs learn that their bossy behavior works to get what they consider to be an uncomfortable situation to end.

As one client told me: “We have three dogs interrupting if we even sit too close. If we hug, we have one that gets between us and jumps up and down begging to be held.”

This can be a kind of jealousy. It can be upsetting for a dog when something he wants, like affection, is in jeopardy because attention is focused on someone else. In response, some dogs use attention-getting behaviors to disrupt the situation. But even negative reactions from their owners, like picking up and moving the dog or scolding, are viewed as a reward for their antics, as any attention can be better than none at all.

How to Change Your Dog’s Behavior

For dogs who are aggressive or overly anxious around intimacy, these situations are best addressed by a veterinarian, who can offer in-depth behavior modification using positive reinforcement training.But if your dog is interrupting your sex life in a nonthreatening, but still annoying manner, here are some strategies to help dissipate the conflict.

1.Give your dog an escape route. Some 43 percent of dogs share beds with their owners, according to the 2007 American Pet Products Association survey. And though you may enjoy cuddling in bed with your pet, for moments of human intimacy, remove the dog. Train him to relax in a separate area, like a crate or dog bed or in another room. Or simply give your dog a way out. “We’ve opted to make sure the door is always open, so they can have a solid exit strategy,” one owner says.