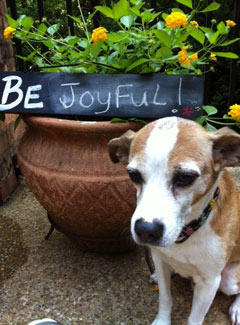 Old man Doug has always required a degree of privacy when he does his outdoor business. If he catches you watching him, he’ll stop midsquat and mosey on away until he thinks you can’t see him anymore. Since he trained us well, we mostly allow him to choose his own Southern pine or magnolia tree to water and fertilize. That’s because he is a good ole Southern squirrel dog with plenty of land and space to be a dog.

Our town is just now considering a dog park, which would confound Doug the dog. Maggie the yellow Lab up the street and Margo the rescue Jack Russell Terrier next door are all he needs for a little company now and then. He’d much rather roll in the grass in our front yard or sniff trees in the woods behind us.

All that is about to change. We are trading our sweet home Alabama for a new urban life in Washington, D.C. We’ve sold most of our stuff and plan to downsize like there’s no tomorrow. But Doug doesn’t get a choice. He’s going with us, and that’s going to be a problem. The idea of following behind him with a little plastic bag is enigmatic. Surely he will find that mortifying, and I’m not sure he’ll ever get over it. Even now, as deaf and near blind as he’s become, I allow him the dignity of choosing his own outdoor toilet location and take care to not embarrass the old man.

The move is not something we sought out, but now that it’s upon us, we have just started to consider what it means to take our Southern-born fellow out of his stomping grounds. He’s old and set in his ways and I’m not sure he’ll fit in. Will his Southern manners and gentlemanly ways make him an outcast among the more refined city dogs he will meet at a designated dog park? Will he yearn for the days of curling up on the front porch, in the sun, while we sipped tea and dropped him small pieces of barbeque from our plates? Will he understand he’s to trot neatly next to me instead of running in crazy circles around the yard, sniffing the deer droppings from the night before? I can’t imagine anyone patting his head and saying, “Roll Tide, young man,” like they do around these parts.

He’s going to leave all his people behind. The locals who ask after his health, the vet who calls to check in when he’s under the weather, and the little girls who grew up and went to Bama, Ole Miss, Georgia or Auburn, and come by on semester breaks to check on their old friend Doug. 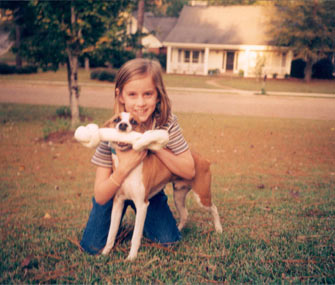 Carolyn Mason
Doug poses with his "sister" Laura, then age 5, when the family first brought him home.

We got him when our youngest daughter was in kindergarten, and they all grew up together. He was the son of Rambo and Jo Jo, a pair of old dogs who lived together for 8 years before producing their one and only litter of little squirrel dogs. Doug was the runt, and now at 18 years old, he may outlive even old Jo Jo.

When I picked him up from his first trip to the vet, I eagerly pressed the doc to speculate upon his heritage. I figured he was a mix of Jack Russell, Beagle, maybe some Pit and definitely a splash of terrier.