February 22, 2012: We've scoured the Web to find the best and most compelling animal stories, videos and photos. And it's all right here. 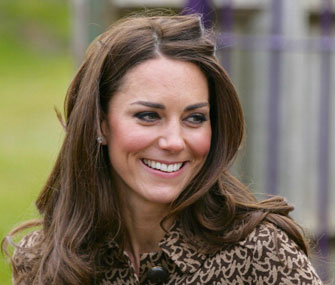 The name of the black Cocker Spaniel puppy who belongs to the Duke and Duchess of Cambridge had been kept a tight secret — just like the details of Kate Middleton’s wedding dress. But while visiting a group of school kids, Kate revealed that the puppy, who’s been keeping her company while William works for the Royal Air Force in the Falkland Islands, goes by Lupo. It comes from the Latin word for wolf, lupus. — Read it at ABC News

Firefighters Rescue a Dog Trapped in a Septic Tank

It took 18 firefighters and two hours to free a Pit Bull from a collapsed septic tank in Calimesa, Calif. The young dog was trapped 15 to 20 feet down a hole. — Read it at CBS Los Angeles

Plus: On the other side of the country, citizens, police and public works employees in Maine worked together to free a kitten who was stuck in a storm drain grate. — Read it at Catster

The Balunsats of Cecil County, Md., consider Snowbird to be a member of their family. But the county says that owning a goat violates its zoning regulations. So Craig Balunsat has filed suit in federal court, arguing that he’s constitutionally entitled to keep his pet — that treating a goat differently than a dog or a cat is discriminatory. — Read it at the Baltimore Sun

Two 19-year-old, 400-pound western lowland gorillas enjoyed a quick jaunt outside their enclosure at the Kansas City Zoo after zookeepers neglected to lock two interior cage doors. Visitors were moved to safe areas, and half-brothers Mbundi and Ntondo were lured back into their enclosure with some help from water hoses. — Read it at the Huffington Post

This poor thing couldn’t be less thrilled to be stuck in the bath — and he definitely couldn’t be any more adorable. — See the photos at People Pets