Home ›
Our Pet Experts ›
Dr. Laurie Hess ›
5 Facts That Will Change the Way You Think About Rats

5 Facts That Will Change the Way You Think About Rats 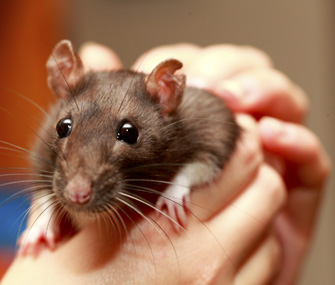 Thinkstock
Did you know that rats form lifelong bonds with their owners and respond to their sight and voice?

The word “rat” for many people immediately conjures up the stereotypical vision of a beady-eyed, pointy-nosed rodent that scurries around at night in the trash. But actually, domesticated rats can make phenomenal pets and are far from the invasive vermin that people commonly think of when they think of rats.

They are fastidious groomers that actually do not like getting dirty. In general, if they get something on their fur, they immediately try to clean it off. They love to groom each other (allogroom) and to gather and organize their food into piles. So they are actually quite neat. Rarely do they need bathing. Typically, the only rats that require regular baths are older, obese, ill or arthritic rats that have difficulty grooming themselves, or unaltered males that mark their territory with urine.

2.Rats are extremely smart and empathic.

Many people don’t think of rats as being smart, but they are actually very intelligent and easy to train. Their intelligence is why rats are so often used in psychological studies to help understand human behavior. They can be taught to perform tricks, master puzzles, run through mazes and even solve simple problems. All they need is a dedicated trainer and some motivation (usually with a favorite food reward).

It’s incredible the tasks rats can perform when they are shown how. For example, rats can be taught to play fetch and to catch a ball. They can also be taught how to drop a ball through a hoop, as in basketball. Rats will also respond to their names when called. They also show empathy and compassion for their fellow rats when they are in distress — qualities that are not often attributed to animals other than humans.

Ask any rat owner, and he or she will tell you: Rats recognize their owners and respond to their sight and voice. They are very social and love to hang out with human family members on the couch or on peoples’ shoulders or in their laps. They will even try to groom their human companions as if these people were other rats in their “rat pack.” Pet rats love the warmth and contact of their caretakers and are actually very cuddly!


4.Sadly, rats are not long lived.

Most people don’t know this, but rats typically live only two to three years. Also, keep in mind many rats start to develop common medical problems after even just one year of life. So if you’re considering having a rat as a pet, realize that your little buddy may not be around as long as a dog or cat. You can make the best of it, though, by making sure your pet rodent gets optimal care, including regular veterinary attention (see next tip). Good everyday care for your pet rat would include things like having its bedding (preferably paper based) spot-cleaned daily and completely changed weekly. Rats should be fed a base diet of pellets specifically formulated for rats, plus clean water and a small amount of table food (fresh produce, bits of cooked egg or pasta or meat, and occasional nuts or seeds). They also need exercise — running in smooth-sided toy wheels that can be placed in their cages and by having regular out-of-cage time as well.

Rats, like dogs, cats and people, can often develop commonly encountered medical problems, such as breast tumors, respiratory tract disease and uterine infections. Some of these conditions can be avoided altogether (such as uterine infections that may be prevented by surgically removing the uterus and ovaries before 6 months of age), while others can be treated if caught early (such as breast tumors that may be removed with a mastectomy). To prevent or treat disease, rats must have regular checkups with a rat-savvy veterinarian. They should be examined initially after purchase or adoption and then, ideally, given their limited life spans, checked every six months after that to try to increase the likelihood of diagnosing and treating disease early on. Unfortunately, many rat owners either do not bring their pets to the vet for preventive checkups or wait until it’s too late to bring their pets in when they are ill.

So if you want an intelligent, interactive, entertaining and easily trainable pet, consider a pet rat. Rats may not live as long as dogs and cats, but the time you do have with them will be thoroughly rewarding.