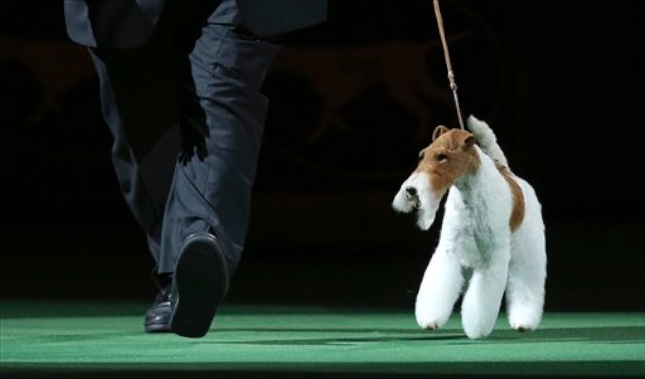 Sky, a 5-year-old Wire Fox Terrier, leapt up onto her hind legs as she was crowned Best in Show at the 138th Westminster Kennel Club Dog Show at Madison Square Garden in New York on Tuesday night. The Terrier Group has won more often than any other Group in Westminster history — 46 times — and took the top prize as recently as 2010. This is the fourteenth time a Wire Fox Terrier has earned the honor.

“Oh, it’s overwhelming,” says Sky’s handler, Gabriel Rangel, who was in New York from Mexico to show her. “I’m so proud of her…. There’s no words to describe this.” Rangel also showed the Best in Show–winning Terrier in 2010.

Sky has won 128 Best in Show titles during her career in the ring, including the National Dog Show in 2012 — where she beat Affenpinscher Banana Joe, who won Westminster in 2013. Sky is from California and is owned by Victor Malzoni Jr. and Torie Steele. She already had her own Facebook and Twitter accounts, which are sure to gain many more followers now.

Rangel scooped the little dog up in his arms when she was selected by Best in Show Judge Betty Regina Leininger of Frisco, Texas.

GCH Afterall Painting the Sky beat out several top dogs to take the honor. Ally, a Standard Poodle from New York who's also won more than 100 Best in Shows, was given the Reserve Best in Show title, which is akin to being the runner-up. Ally plans to retire. Another finalist, an affectionate Bloodhound named Nathan, was the clear crowd favorite.

Sky was selected from among 190 breeds and 2,845 dogs. She succeeds Banana Joe, who retired from the show world after his win last year. He now lives in Holland, but is visiting New York for the show this week.

The Best in Show judge does not get to see any of the seven Group finalists before entering the ring with them. 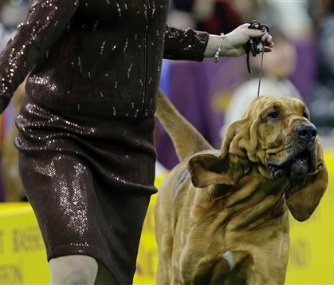 AP
The crowd at Madison Square Garden fell in love with Nathan the Bloodhound, one of seven Best in Show finalists.

"I am highly and deeply honored to have such an outstanding lineup," says Leininger, a breeder, owner and handler who has managed the show careers of many top-winning dogs. "Thank you for presenting me with seven outstanding dogs." Veteran commentator David Frei agreed. "You cannot go wrong here," he says, as Leininger was weighing her decision. "They’re all beautiful, they're all deserving."

The contestants in “America’s Dog Show” are not judged against each other, but rather against breed standards.

There was tough competition and a long list of crowd favorites at the famous show, which was celebrating Frei's twenty-fifth year as a commentator. With it showing opposite the Sochi Games, many were referring to Westminster as the Olympics of the dog world.

The Best in Show winner first competed against members of her own breed to take the Best of Breed title at Piers 92/94 along the Hudson River. She then went on to compete against representatives of the breeds that made up her Group at the Garden. Each of those seven winners wound up in the Best in Show ring.

Best of Hound Group: There was lots of love from the stands for this group, especially for Biff, a Wirehaired Dachshund who cohost Erica Hill says was “hamming it up for the crowd.” A Portuguese Podengo Pequeno named Tango was one of three new breeds to compete at Westminster. Shouts of "Bassett!" and "Beagle!" could be heard, but the winner was well-loved too. Nathan, a 135-pound Bloodhound gave his handler, Heather Helmer, sloppy kisses after taking the Group prize. “He’s a kissing hound,” she says of 3-year-old GCH Flessner’s International Success. “We’re both very, very, very excited for this win… he loves the clapping, he loves the crowds.”