Teaching My Cat to Love My Husband — Step 5

Vetstreet contributing editor Kristen Seymour's husband, Jared, loves cats. Unfortunately, their cat, Trixie, doesn’t care much for Jared — so they’ve enlisted trainer Mikkel Becker to help them teach Trixie that Jared is actually kind of a catch. This post is the fifth and final in a series — be sure to check out parts one and two (from Kristen) and three and four (from Mikkel) to get the full story. 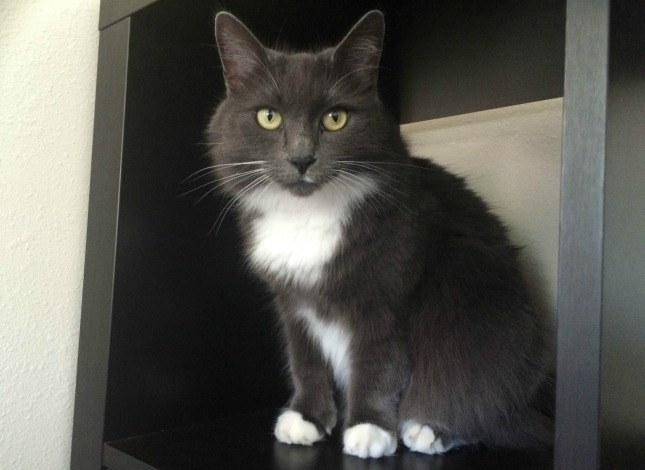 Credit: Kristen Seymour
By modifying their behavior, Kristen and Jared have helped Trixie gain confidence. She's started to find new favorite places to hang out and actually seeks affection from them both!

All About Trixie: What We Learned

When we started this process, we felt like we knew Trixie pretty well (she's our cat, after all) but through our conversations with Mikkel, we learned a few important things about her. For instance, we knew that while Trixie was definitely not a scaredy-cat, certain things tended to make her skittish. Mikkel helped us realize that Trixie’s biggest fear trigger is probably hands reaching for her, especially from above.

Learning that Trixie wanted to be near us but that petting — which was our way showing her love and affection — was scary for her was a total game changer. By adjusting the way we interacted with her, we were able to make her far more comfortable with us... and with everything else.

I'll be honest: Putting a stop to the petting was tough. It’s surprisingly hard to resist reaching for your kitty’s soft fur when she comes trotting by. In fact, I caught Jared reaching toward her out of habit on multiple occasions. But the more we resisted the urge to pet her, the more confident Trixie became in our presence. She began spending more and more time near us, and her previously rare nighttime visits to our bedroom — the room she’d always visited least in the entire house — increased in frequency. And she wasn’t only spending time with me — she even began snuggling up with Jared for a few minutes here and there.

In addition to not reaching for Trixie, Jared made a point to adjust his body language when he interacted with her and to reward her with treats as often as possible. He continued to feed her whenever he was home and able to do so, but while he was serving her dinner, he kept his body turned to the side, rather than facing her head-on. Before we knew it, Trixie wasn’t just allowing him a brief touch while he fed her — she began actively seeking his affection while up on her perch near her bowl, even when it wasn’t mealtime. When he’d stop petting her, she’d rub up on him for more.

And it just keeps getting better: One night recently, Jared was laying on his stomach on our bed talking to me and Trixie hopped up and stretched out on his back for a solid five minutes. And! Just yesterday, she climbed up on his lap as he sat in his desk chair and she purred while he petted her. This went on for several minutes, and when she'd had enough, she just left — no biting, no running, no reaction. She was just ready to move along. Talk about success!

I don’t know which makes my heart happier — seeing him smile as he loves on our kitty or hearing her purr loudly from across the room.