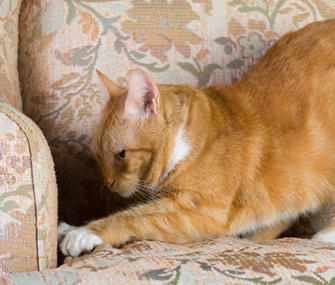 When I tell people I’m a cat trainer, jaws drop and heads swivel. The average person seems shocked by the thought of training a feline. After the first few moments of speechlessness or laughter, I hear something to the effect of, “Cats do what they want. We work for them; they don’t work for us. Dogs like to please and are trainable. But a cat? No way.”

The misconception and labeling of felines as untrainable does harm to the species. Most people don't know about the available cat training and behavior intervention resources. When a cat develops abehavioralproblem that is intolerable to his person and does not go away on its own, that cat is, in some cases, surrendered or, in especially sad cases, euthanized. Few people know of the help they can get for their cat through veterinary behaviorists or veterinarians working with positive reinforcement trainers. Any feline behavior change should first be evaluated by a veterinarian to rule out a health condition before assuming a behavioral problem.

From my experience working with veterinary behaviorists and veterinarians to train cats, I know that behavior issues vary from aggression toward other felines to fear of new people. But of all the issues cats display, three are more common: clawing inappropriate household items, playing roughly with humans and eliminating outside the litterbox. But there’s good news to accompany those top complaints. In most cases, with the right intervention they are easily resolved.

Read on to find out why the issues are so common among cats and how to resolve the problem behavior.

Motivation: Clawing items around the house releases energy and tension while wearing down nails and stretching joints. The cat’s claw marks as well as scent dispersed from glands in his paws are ways for him to communicate his presenceand territory to other individuals. Scratching posts are often hidden in rooms without high traffic, out of human sight, but that means those spaces are less accessible for the cat and hold less communication value. Cats scratch frequently in areas where humans and other household animals preside, such as the living room, with its scent-laden furniture, blinds and carpet.

Solution: Explore and cater to the scratching surfaces and horizontal or vertical scratching post configurations the cat likes best. Reward appropriate scratching in designated areas with praise, treats and play. Scratching posts should be placed next to areas the cat has clawed before, while the previously clawed areas are made less attractive by temporarily covering them in a deterrent, like double-sided tape. Use a cat-proofed room when the feline cannot be supervised to limit access to areas he may claw.

Mouthing and Scratching During Play

Motivation: Some cats are conditioned since kittenhood to play with their claws and teeth on human skin, because many humans engage in rough and wrestling play with their hands. Even more reinforcing for the cat is when a person jerks back or attempts to move away when a cat pounces in play, as the human re-enacts a response live prey would give.

Solution: First resolve whether the behavior is aggressive in nature or playful. If the behavior is suspected to be aggressive, seek professional guidance from a veterinary behaviorist or positive reinforcement trainer working with a veterinarian. If the cat’s antics are play based, the reward of attention and reaction to clawing and mouthing must be removed. In addition, play must be directed toward appropriate outlets, like feather or motorized toys that release a cat’s predatory instinct in a nonharmful manner. Lastly, expend your feline’s energy in creative ways, such as setting up modified hunts by hiding treats on cat perches and feeding meals from food puzzles.

Motivation: Cats may not use the litterbox due to medical issues that makes urination painful or getting into the box difficult. Carpet is a convenient and comfortable material on which to eliminate and may contain past elimination smells to prompt more bathroom breaks there in the future. Keep in mind, some cats also spray or mark areas, which can be associated with issues like stress. Litterboxes can be undesirable to cats because they are put in hard-to-reach locations like the garage, basement or laundry room. The box itself may also be a deterrent. Most boxes are too small, plus the cat may dislike the litter or smell of the cleaner used on the box, or the litter may not be changed frequently enough. Some cats are fearful of covered or motorized cleaning boxes and may not use them.

Solution: Give your feline a thorough medical check. For cats who are difficult to train to the box or those who suddenly stop going in the right areas, a medical issue may be to blame. If the cat is healthy, the box itself may need improvement. Litterboxes are often too small; they should be as long as from the tip of the cat's nose to the tip of his tail, or about one and a half times the length of the cat's body. Plastic storage bins make ideal boxes, as they can be purchased in long, shallow sizes. (For older, arthritic cats, low sides can make it easier to get into the box.) In general, most cats prefer uncovered boxes without mechanical functions, but every cat is different, and yours might not mind them. Clumping, unscented litter is preferred by most cats. Boxes should be scooped out at least twice daily and cleaned with unscented cleaners. Each home should have one litterbox for every cat in the home, plus one additional — in other words, two boxes for one cat and three boxes for two cats. Boxes should be placed in low, easy-to-reach areas that still provide the cat some privacy.

If you’ve tried all these tips and still no luck, don’t lose hope. No one solution fits all cats. Contact a veterinary behaviorist or a veterinarian working with a training professional to guide you on the best ways to help your cat succeed.