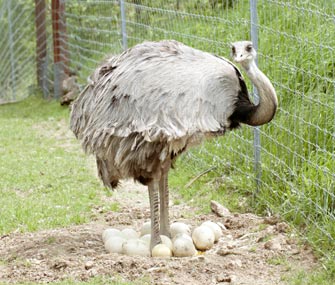 iStockphoto
Have you heard of a South American bird species called the greater rhea? It's the dad's job to incubate the eggs and raise the chicks.

As we're celebrating our own dads this Father's Day weekend, don't forget that there are plenty of patriarchs in the animal kingdom who deserve to be celebrated, too. Of course, there are some species in the animal world where the fathers do the fertilization duties and are never seen again — but you may be pleasantly surprised by how hands-on certain male animals are when it comes to caring for their young.

Mammal moms are special because they give milk, but with animals who don't suckle their young, there's no excuse for dads not to give equal care. Some, in fact, do more than half.

Frogs are famous for having terrible parents, both male and female — normally they dump the eggs and leave them to fend for themselves. But some species of amphibians do care for their young, and sometimes it's the dad who's in charge.

In many species of dart frogs, the male visits the clutch regularly to keep it moist — something any frog with a bladder can do, so it doesn't have to be the mom. Then when the eggs hatch into tadpoles, he carries them on his back to a small pool of water that he finds on the forest floor or in the nooks and crannies of plants.

For the Japanese giant salamander, the male fans the nest with his tail, which seems to help keep the water oxygenated. He also agitates the eggs with his head and body, which keeps them from sticking together. And though the fact that he eats some of them may not exactly seem like devotion, researchers note that he chooses the eggs that are dead or infected with mold, which can spread to the rest of the clutch if not removed.

In many species of songbirds, both parents bring food back to the nest for the young, but some bird dads go a lot further. When it comes to the greater rhea — a South American bird who resembles an ostrich or emu — it's the male who incubates the eggs and raises the chicks. He sits on the nest for up to 40 days 'til the youngsters hatch, and then takes care of them for up to six months, letting them take shelter under his wings to stay safe and comfortable. Males may even adopt lost chicks. And what's the female doing all this time? She's off mating with other males and leaving them to raise the kids.


Even safer than a nest is carrying the eggs in your own body, and if you're not a mammal who comes equipped with a womb, there's no reason for the guys not to do it.

The most extreme example is the seahorse. The male seahorse has a brood pouch that acts a lot like a mammalian womb. The female deposits her eggs in the pouch, and after the male fertilizes them, they attach to the wall of the pouch, which contains a fluid that provides nutrients and oxygen. After several weeks of gestation, the male undergoes hours of labor to give birth to tiny seahorse babies.