The Benefits — and Challenges — of Adopting a Retired Military Dog 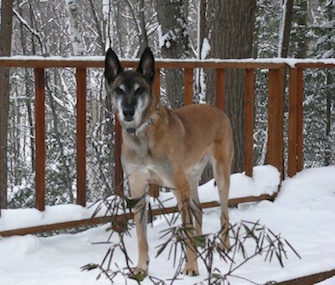 As the Davises can attest, giving a home to a retired war dog can be both rewarding and challenging.

For Doug Davis, leaving his military dog, Smoke, in 1970 was so emotional that he didn't get another dog until 2008, when Louisa Kastner, who now works with Mission K9 Rescue, asked if he and his wife would be willing to take Ringo C261, a retired 9-year-old Belgian Malinois who had served in both the Army and Navy.

Almost immediately,the Daviseswere on their way to Denver to get Ringo, because the woman who’d adopted himwas about to have back surgery.

It was an adjustment for the Davises—and for Ringo. “He had to adjust to a home and people and a cat and children,” Pam says.

“We had a rather nervous two to three weeks, and after that he just dialed right in,” Doug says. “We spent lots of time with him and took lots of walks and let him kind of slowly blend into the family.”

He learned to adore their 4-year-old grandson, who was living with them at the time, and eventually made peace with their cat.

Everything was new to Ringo, who would alert if someone came to the door and didn't know what to do the first time the doorbell rang. “It’s really interesting. He knew nothing about civilian life,” Doug says. “The quickest thing he found out is what the kitchen is.”

Ringo underwent three cancer surgeries in the two years he spent with the Davises. When he died, it was so difficult that the couple didn’t think they could adopt again. But six months later, they brought Remmy home.

“Both of these dogs have very outgoing personalities and love being around people,” Doug says. “The word got out that they were military dogs, and Ringo and Remmy must have hundreds of friends.”

Of course, not everything about taking in such a highly trained dog has been easy.

By the time Remmy came along, the Davises had five grandchildren. They discovered the dog would get agitated when the kids were running around. So he’s been kept apart from them, which isn’t easy, because Remmy has to go everywhere with Doug and Pam. “It actually did cost us a lot of time with our grandchildren,” Doug says.

“Once they bond to you, they don’t want you out of their sight,” Pam says. “They get extremely agitated when they don’t know where you are. I refer to it as like having a toddler around. They have to be able to see you.”

But he enjoys going out with them in “Remmy’s van.” 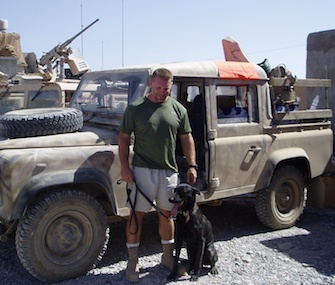 Courtesy of Doug Davis
Remmy poses with Army Sgt. Dan Traeder during their time together in Afghanistan in 2004.

Reuniting With a Long-Lost Friend

As it turned out, Remmy’s former handler, retired Army Sgt. Dan Traeder, who served with the canine in Afghanistan in 2004, had never forgotten his favorite dog. He says giving Remmy to another handler was one of the harder things he’s ever had to do, and he often talked with his buddies about where Remmy might have wound up.

Last year, Traeder saw a story in the Elk Rapids News about how the Davises had adopted his partner. He called his former commander, who said, “'Get the boys together!’ He wanted to go steal him. He thought whoever it was [who adopted the dog] couldn’t be worthy enough to have Remmy,” Traeder says.

Traeder, who’s now a firefighter and lives in Chicago with his wife and three children, made contact with Doug and Pam Davis and arranged to meet with them at a halfway point between their homes for a reunion.

And he realized there was no need to kidnap Remmy. The plot is something Doug and Dan laugh about now.

“Doug and I talk quite a bit, and I’ve got kind of a neat friendship with him now. He’s very much like a mentor to me,” says Traeder, who served in the Army for nearly 20 years, with deployments to both Iraq and Afghanistan.

He’s happy to know where Remmy is and that he’s being well taken care of by someone Traeder has gotten to know and respect. He gets to see Remmy from time to time and keeps in contact with the Davises.

Their story was featured in Saving Private K9, a documentary for the Sportsman Channel, hosted by R. Lee “The Gunny” Ermey.

“Remmy’s such a clown that it’s great to see him in clown mode all the time” now that he’s retired, Traeder says. “Remmy was a tough guy as well — when he was business, he was all business. He’s still healthy and still just a big, goofy dog.”