The Truth Behind 5 Common Myths About Cats 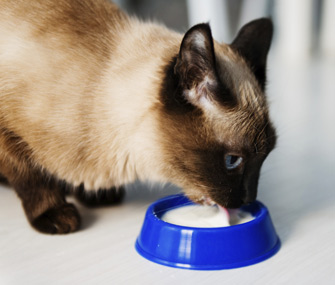 Thinkstock
Cats are generally lactose intolerant and feeding them milk can cause diarrhea and vomiting.

Are cats capable of mating with bunnies? Is it true that neutering a Siamese cat will uncross his eyes? Many myths about cats abound, but sometimes it can be hard to distinguish fiction from fact.Here, weset the record straight on five of the most common cat myths. (Oh, and the answer to those first two questions? No and no.)

Perhaps you haven't met a Bengal or Turkish Van — two breeds known for being eager to join their owners in the shower or bathtub. Turkish Vans even sport the nickname Swimming Cats; many members of this smart, athletic breed love to fetch, swim, jump and even perform doglike tricks. If you have a Bengal or Turkish Van, make sure youkeep bathroom doors shut and toilet lids down. They tend to like to flush the toilet and drop objects into the toilet bowl.

Most cats are actually lactose intolerant, so drinking milk can cause gastrointestinal disturbances, such as diarrhea and vomiting. Generally, it's best to avoid giving your cat any people food — including milk.

There is something almost magical and beckoning about a cat purring on one’s lap — but cats purr for reasons beyond contentment.Newborn kittens are born blind, so a mother cat will purr to orient her kittens toward her at feeding time. Cats also purr when they are sick — or even in the process of dying — as a self-calming technique.

This long-standing misconception fooled many pet owners — until educational efforts were increased, including major campaignsby the American Heartworm Society (AHS) and the American Association of Feline Practitioners.Heartworms affect cats differently than dogs; as a result, some heartworm-positive cats may be misdiagnosed as having asthma or allergic bronchitis. Owners should note that indoor cats are not exempt from heartworms. A study revealed that 28 percent of cats diagnosed with heartworms never ventured outdoors. Make sure you talk to your veterinarian about heartworm prevention for your cat.

In many ways, this myth certainly is not true, but owners need to be especially cautious when it comes to medication. Products such as flea and tick preventives and pain medications are specific to either dogs or cats— and for good reason. Certain products labeled for use only with dogs may cause health problems if applied to or given to cats. If both dogs and cats share your home, read and reread the product labels each month to make sure you give cat-only parasite products to your feline friend.