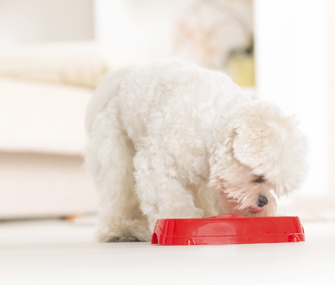 Thinkstock
Your pet's nutrition isn't just about his food. You need to consider his environment and behavior, too.

While many pet owners believe that good nutrition for their pet is all about diet, the topic is actually much broader than that. As a veterinary nutritionist, I know that optimal nutrition comprises complex interactions between the animal that eats the diet, the diet itself, how the diet is fed and the surroundings in which the diet is eaten. All these elements combined affect a pet’s relationship with his food.

Eating is an essential, evolutionarily conserved drive — meaning that, over time, animals that had a strong enough drive to eat were generally the ones that did not become food themselves for other animals. So, it is no surprise that animals will work for food and find eating to be a pleasurable — and rewarding — experience. Throughout evolution, food was a limited resource, so the drive to eat is stronger than the drive to stop eating. Additionally, eating may soothe anxious pets; their food comforts them and reduces their concern over potential loss of food sources.

Many pets in our practice are confined to someone’s home, so they are completely dependent on the mercy of their owners for all their physiological and behavioral needs, including food and water, elimination and the mental and physical stimulation needed to thrive. In this way, they are somewhat akin to zoo animals and may benefit from some of the enrichment efforts used in zoos. Domesticity (captivity) seems to affect pet cats even more than it does dogs. For example, while some owners may describe their cats as finicky or picky eaters, their cats may actually be feeling threatened by their environment and prefer familiar (i.e., comfort) foods.Viewed from this perspective, finicky eating may be more a sign of a larger problem (poor welfare), rather than an issue with diet.

Early life experiences also affect pets’ relationships with food. For example, research in multiple species has shown that the offspring of mothers that do not receive enough food during pregnancy can be predisposed to obesity later in life. In some mothers, this association seems to result from signals transmitted to the fetus when she has experienced food restriction during pregnancy. Studies also suggest that, after the experience, effective environmental enrichment for the offspring may help reduce the risk of obesity and other health problems later in life.

Pets choose the foods they eat largely based on smell, taste and mouth feel. Pets, particularly confined ones, are also greatly affected by their surroundings. What this means from a nutritional perspective is that it is helpful to offer new foods as a choice at meal time. New foods should be in a separate container next to the usual food and offered on a day when the owner can observe what happens. If the pet refuses the new food, it may be for a variety of reasons, including anything from distaste to an impoverished environment that lacks enrichment.

In fact, some of the current enthusiasm for unconventional foods such as ancestral, homemade and raw diets seems more related to factors other than nutritional content. People often seem to turn to such diets in an effort to tempt what they believe is a finicky eater, but in reality, the diet may not be the problem — although it may become a problem if not properly formulated.