Home ›
Our Pet Experts ›
Dr. Tony Buffington ›
Strange Eating Habits in Cats — Why Do They Do That?

Strange Eating Habits in Cats — Why Do They Do That? 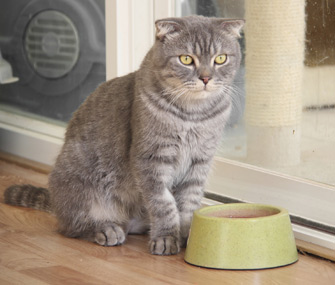 Thinkstock
Some cats have strange eating habits, such as wolfing down their food, picking at their food, or preferring only wet or dry food.

Cats most commonly eat multiple small meals throughout the day, but some owners notice differences in the way their cats eat their meals.

For example, some cats wolf down their food like hungry dogs, whereas others seem finicky and only pick at their food. Some pick up mouthfuls of food and then run off to eat away from the bowl, or away from other cats, before coming back for more. Or they eat only at certain times or when no one else is noticeably around. Some cats (and some owners) prefer canned or dry food to other alternatives. Cats also have prey preferences during hunting or play that can influence how they like to eat, and some leave “trophies” of dead animals for their owners as part of their eating experience.

How Do These Behaviors Develop?

I like to think of behavior in general as the result of three interconnected factors:

Your individual cat’s history, as well as the context in which his behavior occurs and what his expectations might be as a result of that behavior all influence what actually occurs. For example, each time your cat acts, his environment responds in some way. Your cat receives a response from the environment through his senses — sight, sound, smell, touch and taste. His brain then attempts to make sense of this information and shapes a meaning from it according to his personal history. The place where the interaction occurs (the context) and what he expects to happen next (his expectations) also influence his behavior.

Your cat’s life history consists of his family and environmental past. The context is the cat’s present surroundings — the resources he has available to cope with the situation he’s living in, as well as his interactions with the world around him. Your cat’s expectation is what he thinks will happen next.

Some cats are programmed to be more sensitive to stress or threats in their surroundings. For example, a cat may have had a bad experience early in life (like being orphaned), which can make him more sensitive to threats in his surroundings. If your sensitive cat lives in an enriched home that meets all his needs, this sensitivity may never be expressed. On the other hand, if the cat lives in a barren or unstable, chaotic household that is more than he can cope with, unusual behaviors can result.

Your cat’s expectations are also about predictability. If your cat expects a good outcome, he will thrive in most situations. Expecting a bad outcome, or even more importantly, not knowing what to expect, can be very threatening to a cat. This is especially important in indoor cats because they are confined and have much less control of their surroundings than do their owners, who literally control every aspect of the cat’s life, including where and when he can eat, drink, eliminate, explore, etc.