Uggie the Dog Shines at the Golden Globes 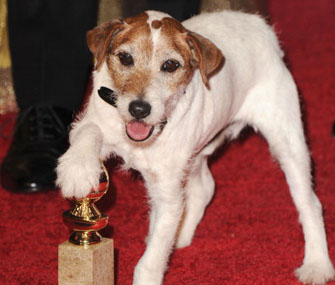 WireImage
Uggie poses with a trophy at the 69th Annual Golden Globe Awards.

Uggie the dog delivered a show-stopping performance at Sunday night's Golden Globes, bouncing across the stage on his two hind legs and then playing dead as the cast of "The Artist" accepted the Best Picture award for a musical or comedy. The pup stars with Jean Dujardin and Bérénice Bejo in the silent French romance, which picked up a total of three Golden Globes.

The star-studded audience oohed and ahhed and cheered as Uggie, dressed to the nines in a collar and black bowtie, performed his tricks. Backstage on the red carpet, the little Jack Russell Terrier celebrated his win with the cast, and even posed with a paw up on the trophy.

But there's no rest for stars, even the four-legged kind. After his big night out, Uggie rolled out of bed early this morning to make the media rounds, including an appearance on the "Today" show with movie mogel Harvey Weinstein. Not bad for a pup who was once on his way to the pound after not one, but two families found him too hyper to live with. Fortunately, Uggie was adopted by trainer Omar von Mueller and his family, where he joined eight other dogs and two cats, as well as a couple of pigeons and a trained parrot. That's quite a cast.

Uggie has been appearing on TV and in films since 2005, but his career really took off this year, with appearances in "Water for Elephants" and "The Artist." In May, the 9-year-old won the prestigous Palm Dog Award at this year's Cannes Film Festival, for best canine performance. But that may just be the beginning of Uggie’s rise to stardom; fans have set up a "Consider Uggie" Facebook page calling for the four-legged star to win a canine Oscar. What's next -- a star on Hollywood's Walk of Fame? We hope so.

Check out the video of Uggie's Golden Globe tricks.