What It's Really Like to Live With an Uggie Dog 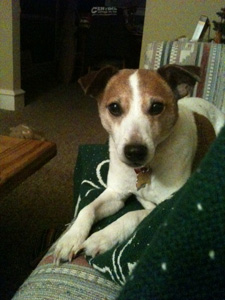 When I walked to the Animal Welfare Association in Voorhees, New Jersey, to adopt a dog, I expected to walk out with a two-year-old, medium-sized mutt of indeterminate origins.

Instead, I brought home Emily, a four-year-old Jack Russell Terrier, who was shaking so hard in her shelter crate that I cried. We've been inseparable ever since that day six years ago.

But in my experience, a JRT isn't the easiest dog to own — especially since what most people know of the breed has been gleaned from television or the movies. Emily is most often compared to Moose, the dog who played Eddie on the TV show Frasier.

Of course, the JRT stealing the show right now is Uggie, who starred in The Artist, a film that's been nominated for an Academy Award for Best Picture. He, too, was found in a shelter.

These Jack Russells are highly trained and — on-screen — appear to be perfect companions. While it's true that JRTs are wonderful dogs, I worry that all this Uggie fever will inspire people to buy or adopt one without knowing enough about the breed.

So I've culled my ultimate "what it's really like to live with an Uggie" primer for would-be owners based on my own first hand experience:

Jack Russells are working dogs who were bred to hunt. In fact, their affinity for chasing mice is why a lot of people with horses usually have JRTs, so they can suss out all kinds of vermin hiding in barns.

For you, this means that your dog will want to hunt anything and everything that is small and furry. Emily has killed a bird, two baby bunnies — even eating one — and she once brought a mole into her crate.

She is endlessly running after green tennis balls, and she goes bonkers when she sees a cat. So if you have other small animals in the home, a JRT might be a problem, especially if you're adopting an adult dog. I've tried to train Emily to not feel the need to rip apart the stray cats we've come across on our walks, to no avail.

My friend Lola just adopted an adult Jack Russell and asked me what I could do to get him to stop being mean to other dogs. I don't have an answer because Emily is the same way too. It's one reason why she ended up in a shelter in the first place.

If JRTs are not properly socialized when they're young, it's hard to get them to interact with other dogs. This means that you can't be social with your Jack Russell in tow — no dog park, no yappie hours and no doggy daycare. And most adult JRTs do best in single-dog households.

If you want a dog who will laze around all day, do not get a JRT. Emily is now 10 years old, but most people think that she's a puppy because she's more active than most young dogs. She can sprint up four flights of stairs and not even have a hitch in her breath.

If you have a Jack Russell, your dog is going to require a lot of attention and a lot of activities to burn up energy. Some owners do this through agility training, while others run with their JRTs. I did the latter until I found out that Emily has a heart murmur. Now I take her on long walks.

If JRTs are not exercised, they will be unhappy, which makes for an unhappy household. Case in point: Moose, the Eddie dog from Frasier, was given to a company that works with animals for TV because he was uncontrollable at home. If you want a dog who will get you out walking every day, a JRT could be a good fit. If you're not dedicated to spending that much time with the dog, please move on.

Oh, and they jump. High. Even at 10, Emily can still get high enough to see what I'm doing outside the chest-high back door window.

A stray cat had been taunting Emily from the yard behind ours. I'd thought that the backyard fence had been high enough to stop her and it was — until she figured out that she could jump against the recycling can to use as leverage in order to get over the fence. JRTs are incredibly smart and wily — which also makes them stubborn.

Yes, my dog is an adult, but we still crate her when we're not home. It's her domain. She likes having a place that is hers and, in some part, enclosed. When contractors were coming in and out of my house, she'd retreat to her crate and not leave — even if I left the door open.

So look into crate training. It's not cruel, and it could be much better for your dog if she has a place that's a home inside your home.

Emily rarely lets me or my boyfriend out of her sight. At night, she slides under the covers so that she can snuggle with one of us. If we're sitting on the couch, she likes to lie on one of our laps.

Despite having lots of energy, many JRTs are part-time lap dogs, especially as they age. If you like active dogs who have a yen to cuddle, a JRT is that perfect blend.

As for me, Emily has not been an easy dog, but she is the best dog.

Jen A. Miller is the author of Book a Week with Jen: 1 Year, 52 Books and a Year of Starting a New Chapter.

Do you have a Jack Russell Terrier? Is your dog like Emily or completely different? Share your stories in the comments below.