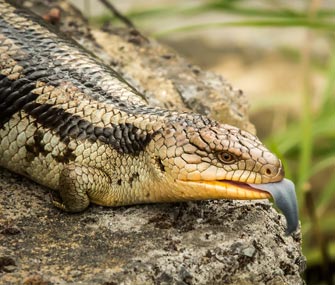 Thinkstock
Blue-tongued skinks are easily tamed and often like to be handled.

Although many people don’t know what a skink is, they actually make great reptile pets and have become increasingly popular in the past few years. Perhaps the most popular pet skink is the blue-tongued skink (or “blue tongue”), a group of lizard species that are all typically fairly large and found mainly in Australia but also in New Guinea, Tasmania and Indonesia. While these animals are sometimes captured from the wild and sold by unscrupulous dealers, those available in the U.S. are mostly bred in captivity to be kept as pets. You really want to obtain a captive-bred skink, as these animals likelier will be healthier, easier to handle and not taken from their wild home.


Cool Facts About Skinks in General

The skink family of lizards that blue tongues belong to is comprised of more than 1,500 different species, most of which have no necks and very short legs (some species actually have no legs or feet at all and move more like snakes). Many species have long, tapered tails that they can release and break off if they are grabbed by a predator and that they can subsequently grow back. Despite this fact, skinks in captivity should not be picked up or restrained in any way by the tail. If the tail does happen to break off, it’s a good idea to have a veterinarian take a look at the injury to make sure no medical intervention (such as antibiotics or wound care, if it isn’t a clean break) is needed.

Depending on the species, skinks range in size from 3 to 18 inches long or more, snout to tail tip, and many — although not all — skink species are predominantly carnivores or specifically insectivores, consuming crickets, flies, various beetles, worms and caterpillars, plus occasional small rodents. In the wild, many skinks dig and bury themselves underground in tunnels where they can hide from predators such as raccoons, foxes, snakes, hawks and opossums, while a few species are arboreal (tree-climbers). Most are active during the day and love to bask in the sun. Many skink species lay eggs and nest under foliage or under the edges of buildings, while a few give birth to live young. They can be very territorial and protective of their nest sites.

There are lots of reasons why I recommend blue-tongued skinks over other types of skinks or even over many other reptiles as pets. Here are a few cool facts you might like to know, as well as some things you should be aware of if you are thinking of bringing one home:

1. Their tongues really are blue! Blue tongues are called such because they have a large, bright blue tongue that they stick out to try to ward off enemies. They have short legs, broad bodies and triangular-shaped heads and can live 15 to 20 years in captivity.

2. They’re generally happy to be handled. Blue tongues tend to be gentle, intelligent, inquisitive, easily tamed lizards that often like to be handled. Many even enjoy being petted or having their heads scratched. Children should be supervised when handling them, as the reptiles can become startled and jump. They can mistake small fingers for worms if they’re hungry, so be careful not to handle them when they haven’t eaten in a while, and be sure to wash hands after handling, as all reptiles can carry Salmonella bacteria.