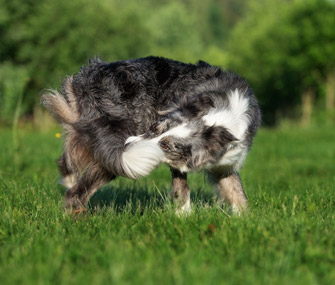 Thinkstock
Tail chasing may be due to a medical issue or a compulsive disorder.

Many people enjoy watching YouTube videos of dogs and cats chasing their tails and laughing at how silly they look. However, what many people may not realize is that sometimes those silly videos are actually showing pets with potential behavioral disorders. The pets in the videos may be engaging in compulsive (repetitive) behavior without what appears to be a specific goal or purpose. However, while to the untrained eye the animal may appear to have a lack of purpose, there may be one in that animal’s mind.

This is a type of behavior that can affect both humans and pets. Humans diagnosed with obsessive compulsive behavior may wash their hands so often that their hands are chapped or bleeding or check all the locks on their doors and windows repeatedly. They appear to be unable to stop their own behaviors and report that they constantly think about performing these activities. In veterinary medicine, we have no way of knowing if an animal is actually thinking about doing those repetitive behaviors so we do not call it an obsessive compulsive disorder but rather a compulsive disorder.

Why do animals engage in this behavior? First and foremost, you need to consult your veterinarian to rule out medical causes of any sudden, unusual or repetitive behavior. For example, neurological problems can cause circling and what appears to be tail chasing, while flea infestations or skin or inhalant allergies can cause excessive itching, licking or other problems. Dogs that chase lights, shadows or imaginary objects may need to have their vision evaluated by a veterinary ophthalmologist and to be checked by a veterinary neurologist for possible seizure disorders. Other types of diagnostic testing may be required.

Sometimes, the Cause Is Genetic

Once medical causes have been ruled out however, owners, in consult with their veterinarian or with a veterinary behaviorist, can look to other causes. In some breeds, we have found a genetic component to compulsive behaviors. Some Doberman Pinschers are more prone to flank suck (which is repetitive sucking, licking or chewing of the flanks), while German Shepherds, Bull Terriers, Anatolian Sheepdogs and Australian Cattle Dogs are more likely to spin and/or chase their tails. Siamese and Burmese cats are more likely to suck and knead on blankets or any soft material. Sometimes when the cat places the material in its mouth and suckles, he may also chew on and ingest the material. This behavior is known as pica, which can occur in both cats and dogs. In this situation, the animal ingests materials that do not provide any nutrients.

Also, just because some animals have the genetic potential to display these types of behaviors does not necessarily mean that they will manifest them 100 percent of the time. Sometimes the behavior begins at a very young age. In other cases, the animal may exhibit this behavior only when exposed to the right conditions or not at all. It has been theorized that our pets engage in these behaviors when they are frustrated or conflicted. 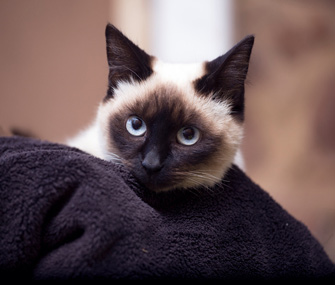 Thinkstock
Siamese cats are more likely to suck on and knead blankets or other soft materials.

This behavior pattern may be the animal’s way of coping with the stress of not knowing what to do and/or picking between two different behaviors. For example, a dog may be stressed by a situation in which he might want to chase after a favorite ball, but it has rolled next to, say, the lawnmower, which he is afraid of. The dog really wants to get his favorite toy, but is reluctant to do so. You may notice your dog exhibiting signs of this conflict if he goes toward the ball but then backs away. He may also whine and pant in addition to this pacing and may start chasing his tail instead of going after the ball. Why? Because chasing his tail may be an “easier” behavior for your dog. It is less frightening than going after the ball that is located next to the big, scary machine. The next time your dog experiences this conflict, he may go straight to chasing his tail and so, over time, this may become a behavior that he automatically engages in. This kind of abnormal behavior tends to manifest (in both dogs and cats) around social maturity between 1 to 3 years of age or during periods of stress or change.