Why a Cymric Might Be the Cat Breed for You 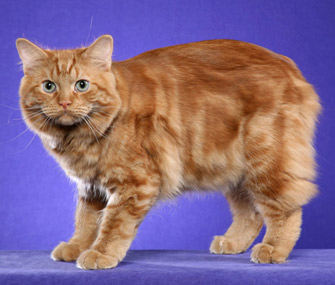 Helmi Flick, Animal Photography
According to one legend, the Cymric lost his tail when he was late for Noah's Ark, and the door slammed shut on it.

There’s so much to love about the squeezable, friendly, intelligent Cymric, who gets his name from the Gaelic word for Wales. He’s the long-haired variety of the tailless Manx. Other than coat length, the two breeds are identical. Learn more about the Cymric and see if this guy might be the right cat breed for you.

There are many myths about how the Cymric lost his tail. One is that he was late boarding Noah’s Ark, and the door slammed shut on it. Another is that mama cats bit their kittens’ tails off to avoid Irish or Viking raiders stealing the kittens, because their tails were good luck charms. However, it’s more likely that a genetic mutation caused the Cymric to be tailless.

It’s not unusual to find a Cymric who loves to play fetch or carry his toys around. He’s also dexterous and will probably enjoy using his paws to get into your cabinets or open doors.

They’re known for their rounded contours.

The Cymric typically has a round head, round eyes and even a rounded rear end.

Often gentle and loving, some Cymrics choose to give all their attention to a single person in the household, while others can be affectionate toward the entire family, even children.

The Cymric has a silky double coat that gradually lengthens from the shoulders to the rear, and he comes in many colors and patterns, including tabby, tortoiseshell and calico.