Home ›
Our Pet Experts ›
Why Do Cats Have Good Balance?

Why Do Cats Have Good Balance? 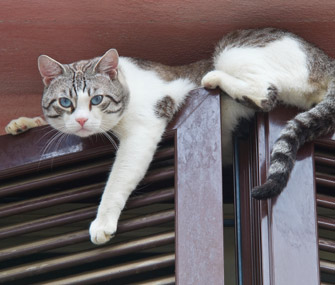 iStockphoto
Cats are built for balance: They have a flexible back and lack a true collarbone.

You’ve probably heard that cats always land on their feet. This is true in many cases because of cats’ amazing balancing abilities, says Dr. Elizabeth Cottrell, DVM, a veterinarian at the Cat Hospital at Towson in Baltimore, Maryland. However, a safe and graceful landing is not guaranteed.

Here are six surprising facts about our four-legged acrobats:

An old wives’ tale holds that a cat’s sense of balance is in her whiskers. Not true. Instead, the whiskers act as feelers that help felines decide whether they can squeeze through tight spaces. They also help direct a cat's mouth for delivering a neck bite to prey, especially at night. Whiskers are also used to sense air movement and help felines detect if someone (or something) is coming.

Cats enjoy a flexible back and lack a true collarbone. This helps them turn, so they’re usually in position to land on their feet, Dr. Cottrell says. When cats fall back-first, they twist around, so their front end is first with hips and back following. The front legs touch the ground first, but all four legs absorb the shock. The tail helps realign her legs and body as she falls, keeping the cat level.

Ear to the Ground

When cats are off balance, their inner ear lets them know. They start righting themselves with their heads, and then their front feet and body follow behind. This body-righting reaction is present at birth, but the air-righting reaction — a cat's ability to right itself in midair before landing — takes four to six weeks to mature. Meanwhile, their ability to balance on a narrow plank may not be fully developed until 10 to 12 weeks after birth.

Even with their great balance, cats’ natural curiosity can spell trouble with open second-story or high-rise apartment windows. A fall from even the height of a single story can result in serious injury. And experience plays a role: The younger the cat, the greater the chance she will be distracted by chatty birds or other wildlife.

It’s not uncommon for cats to accidentally fall from high-rises. Amazingly, research shows that in some cases, cats who fall from a height of more than six stories may fare better than those who fall from lower heights. Why? The longer distance offers them more time to right themselves. Then they arch their backs, stretch out their feet and spread their limbs out, so the skin catches the air, like a parachute, to help them slow down.

In 2009, a 3-year-old cat named Lucky squeezed through a cracked window and fell 26 stories from a Manhattan apartment. Window washers caught the cat’s fall on camera. Lucky lived, and he was treated for a broken lower jaw and a broken toe.