Why Does My Cat… Mask That He's in Pain? 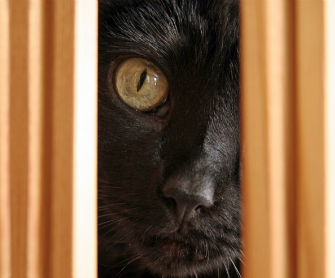 If you’ve ever watched your kitty pounce on a catnip mouse, you’ve seen the vestiges of his wild, predatory nature. Since the rule among predatory creatures is “eat or be eaten,” cats instinctively hide their pain as a survival mechanism to prevent other predators from viewing them as weak or vulnerable.

Granted, your cat probably doesn’t have to hunt down any of his meals, and you likely don’t resemble anything close to a hungry wolf or a hawk, but the instinct remains.

For years, people mistakenly assumed that because cats didn’t show pain, they didn’t feel pain. Now we know that simply isn’t true. The nervous system of a cat is relatively similar to that of a human, so it stands to reason that what is painful for people is probably painful for felines.

But a behavior that's protective in the wild can be problematic in the home, making it difficult for owners to know when a pet is in pain.

Signs Your Cat May Be in Pain

The general rule: Any time your cat starts to exhibit unusual behaviors, it’s time for a trip to the veterinarian. Signs of pain may include:


While older cats may not show obvious signs of pain, X-rays don’t lie: Cats can suffer from arthritis in the limbs and spine, just like dogs. The signs, however, are usually more subtle.

A cat who once groomed himself with a back leg flung straight up may simply stop grooming — and become matted — because it may be too painful to bend like he once did.

The same cat may have accidents outside the litterbox because the sides of the box are too high, and it’s painful to hoist his leg over the top. Or maybe the litterbox is in the basement, and tackling a long flight of stairs is too painful for his creaky joints.

A cat with arthritis may or may not limp, but if he has stopped jumping up onto cat perches and beds, he could be saying that he’s in pain.

All of this means that owners need to be especially attentive to even subtle changes in their cat’s behavior. It also makes that regular visit to the veterinarian even more important.