Why Does My Dog... Like to Roll in Grass? 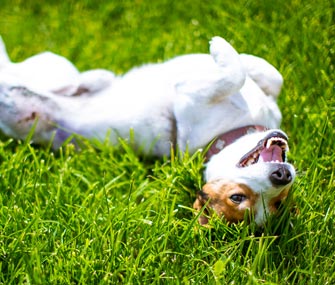 Thinkstock
Your dog may roll in grass to get rid of debris on his back or he may try to mask his smell by rolling in something stinky.

Ever wonder why your dog likes to roll around in grass? Sometimes he looks like he is having a good time, while other times he looks as if he is trying to rub something off of him.

The truth is, rolling in the grass probably serves several functions. It very well may be a way of getting rid of any sort of uncomfortable or itchy debris that might be stuck to your dog’s back, such as dirt, pine sap and bird droppings (sometimes birds have very good aim!). Grass is mildly abrasive. When we walk on it with bare feet, it kind of tickles, itches and maybe even feels a bit prickly. In a way, individual blades of grass can function a little like tines on a comb or bristles on a brush. Rolling around the grass may help loosen up dirt stuck to your dog’s back and help him self-groom difficult-to-reach areas. It may also help brush away loose fur clumps. Certain breeds of dogs “blow” their coats, which means their fur sheds out in clumps. Rolling on a patch of grass might help comb out and remove some of that loose fur — although you shouldn’t think this behavior can replace your grooming sessions with him.

Another reason your dog may be rolling is that there is a specific smell he has detected in a particular patch of grass. Some predators — and dogs are a predatory species — like to roll in certain smells. The speculation behind this particular behavior is that the new smell helps to disguise their scent from their prey. For example, a wolf or coyote may roll over a grass patch that a rabbit has eliminated in, effectively covering itself with the scent of its prey. Researchers believe this may allow the wolf or coyote to move closer to its prey, thus ensuring a more successful hunt. There also may be a social component to rolling, such as conveying a message to another member of the pack. The behavior might be a way to say, “Hey, I found a dead deer over there!” Your dog, of course, may also be rolling to get rid of a smell, such as the scent of shampoo after you have bathed him or after being sprayed by a skunk.

Finally, your dog may roll in the grass simply because it feels good. Finding a soft area to cushion his body and stretch out may provide your dog with an ideal opportunity to scratch his back and soak up the sun. Observing your dog’s behavior can help you determine if your dog is merely relaxing in his environment or if there is something you need to attend to. A dog with something really irritating on his back may roll about more frantically than a dog who is just enjoying the warm grass. Consider how relaxed or intense your dog’s behavior is when he is doing it. A slow, relaxed roll from side to side with his legs kicking up in the air may be an indication of his emotional health and mental status, i.e., “I am happy.” Rubbing his face, neck or back with more energy or force may mean he is doing a little self-grooming or reacting to a smell.

Rolling behavior is common and generally nothing to be concerned about as I’ve outlined above. If, however, his behavior is very intense or repetitive or lasts a long time, you should consult your veterinarian in case it is a sign that something might be irritating him, such as an underlying a dermatologic condition.