How to Keep Yourself and Your Pet From Getting Skunked 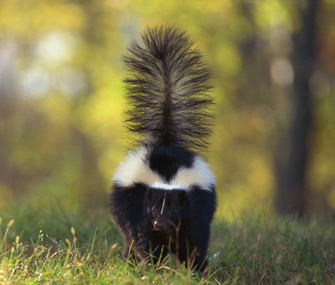 Thinkstock
To avoid attracting skunks to your home don't feed your dog outside, and if you must feed your cat outdoors, place the bowl up high.

Skunks don't really want to make you stink. In fact, they always warn you first.

"The first thing he's going to do is try to run away. If he gets cornered, he's going to turn around and put his tail up and stomp at you. He may charge and stomp. He's hoping you'll back off," says Jerry Dragoo, who studies skunks at the University of New Mexico.

Why Do Dogs Get Sprayed?

In addition to the warning routine, the skunk's black and white coat is a sign of danger to many animals, though dogs don't seem to recognize it. In the wild, "things that are toxic or poisonous have bold, contrasting color patterns, and it's a common theme for predators to be able to easily learn that these bold, contrasting color patterns are bad," Stankowich says.

Unfortunately for both dogs and their owners, domestic canines don't seem to put two and two together the way wild predators do. "It goes beyond skunks — there are accounts of dogs attacking other black and white animals, such as badgers or honey badgers, and not getting the warning colors," Stankowich says. "Something was clearly lost during the process of domestication."

Do Some Dogs Enjoy Getting Sprayed?

Even worse, although some dogs do learn that what skunks have in store for them is nasty stuff, some of them not only don't mind it, they actually seem to relish it. "Some dogs, if they've been sprayed, they know not to mess with skunks anymore. If they see the threat display, they'll back off. Other dogs just can't get enough. They seem to enjoy getting sprayed," Dragoo says. "They'll [go] back again and again and roll around in it."

Why Don't Skunks Just Stay Away From Us?

Unlike most other wild animals, skunks are not as fearful of people and pets because they count on the threat of their stinky defense to keep them from being harassed.

And you can have a smelly skunk encounter without going out in the woods, because skunks are quite happy to live among us. Like any animal, they're looking for food, water and shelter, and our cities and suburbs provide plenty of all three. "Skunks eat pretty much anything. If you leave your garbage out, they'll eat your leftovers, dog food or cat food, fruits," Dragoo says. "They will dig up lawns and gardens for the grubs."

They also get more comfortable with people the more they live around us. "A skunk out in the wilderness may not see humans that often, so he may run away more quickly. But if you're in a campground, those wild skunks are used to people and people's behavior, and they will just walk through and rummage through your tent," Dragoo says. "In the city, skunks are used to people. They can kind of predict how people are going to react; you can push them a little further before you make them spray. If they live in your yard, they know your routine. If you come out every night at 9, they'll wait till 10 to come out."