Home ›
Our Pet Experts ›
Dr. Wailani Sung ›
Why Good Dogs Bite — Part I: You Didn’t Understand What He Was Saying

Why Good Dogs Bite — Part I: You Didn’t Understand What He Was Saying 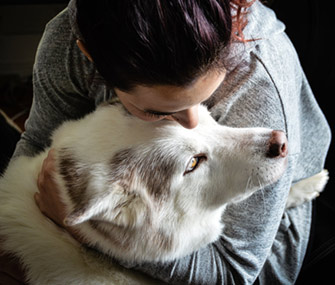 Thinkstock
Humans tend to express their affection in hugs and kisses, but some dogs don't enjoy this and may feel restrained or trapped.

Recently, I wrote about what to do in the event of a dog bite. In that article, I briefly touched on some of the reasons why a dog may bite, even a “good” dog. It is important to realize that dogs who bite should not be labeled “bad” or “mean.” There are a lot of emotions and baggage attached to those powerful words. Instead, understand that when a dog is placed in what he perceives as an uncomfortable situation, just like a person, he will try to avoid it or retreat. If his avenues of escape are blocked, then a dog may exhibit aggressive behavior, and, if the dog feels very threatened, it may escalate to biting. While, as always, you’ll want to be sure to consult your veterinarian for advice to rule out the possibility that an underlying physical problem may be contributing to your dog’s behavior, sometimes the reason for the bite is that you simply didn’t “hear” what your dog was saying.

In this article, I’m going to provide you with some insight as to the many ways we can unwittingly make our dogs feel “threatened.” I’ll provide you with some tips to help avoid these situations and, hopefully, prevent a bite in the first place. If your dog is already exhibiting fearful or severely aggressive behavior, such as snapping, lunging and biting, then you need to seek professional help immediately.


Avoid Conflict, Don’t Cause It

Here is one common situation that is easily avoided. There is a popular misperception in the dog world in which owners are often led to believe that they need to prove that they are the ‘alpha’ animals in the household and must act accordingly. This kind of aggressive human behavior, however, can be counterproductive. Here’s why: Canines have developed a social hierarchy in the wild to avoid physical confrontation and resolve conflict with minimal injuries. Ear, tail and head positions, as well as eye contact (or the lack of it), all convey subtle but important information to other animals of the same species. Think of the body language that your dog displays when you talk to him or reach out to pet him. Most dogs will place their ears to the side, lower their heads slightly and blink or avert their gaze entirely. These are submissive signals that are used to avoid conflict. When a dog is constantly bombarded with interactions by the owner — or sometimes by multiple family members — that he perceives are challenging or threatening, he may reach a point where he can no longer cope and may respond aggressively. So, for example, don’t try to play “alpha” by putting your hand in your dog’s food bowl or moving it around while he is eating.

Some dogs do not enjoy being hugged or kissed on the face. Humans tend to express their affection in hugs and kisses, but this is not how dogs normally express it. While some dogs have learned to accept or even enjoy the kind of attention their owners give them, others may not like being hugged, because they may feel restrained and/or “trapped.” When we kiss them, they may bite to get away from us or to keep our “threatening” faces from getting too close to theirs. Put yourself in their shoes — no matter how much you love your spouse, partner or child, would you want his face to be one inch away from yours whenever you are interacting with him? Usually our dogs have already told us to back off via their body language, such as ears pulled back, avoiding eye contact and pulling away. When we ignore these signs, the dog may feel pushed to the point of exhibiting more intense defensive behavior, such as barking, growling, snarling, snapping and then, finally, biting. Some dogs may skip all the earlier signs and escalate right to biting. After repeated episodes of an owner getting too close for comfort, a dog may resort to biting as his first action, since he knows his warning signals will be ignored. Now your dog has learned to not exhibit any warning signs at all. In my experience, people commonly say that their dogs did not give them any warning, when in fact their dogs had been crying out for help and relief long before the bite incidents ever occurred.

If a dog exhibits any type of aggressive behavior when disturbed while lying down or sleeping, such as growling or snapping, then you must refrain from making contact. When we are sleeping, we are at our most vulnerable. Many dogs, like people, need their own space to recover from the day’s events. Some dogs, just like people, can get really startled when disturbed from a deep sleep. For example, one morning my husband had to leave early, and he leaned over to kiss my cheek while I was still sleeping. I woke up startled, because I did not expect it. Both people and dogs may react instinctively in these kinds of situations, and with dogs, that reaction is sometimes a bite. That’s why I follow the old saying, “Let sleeping dogs lie.” I respect that my dog wants to sleep undisturbed and won’t bother him. Instead, I recommend owners call their dogs over to them for attention. I use positive reinforcement to teach the dog to go lie down on his own bed and make sure everyone understands to leave the dog alone when he is on his bed. That way the dog is not underfoot or lying under furniture where family members may unwittingly disturb him.