Why Doesn’t My Dog… Get Frozen Paws? 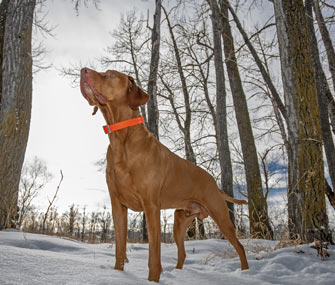 Thinkstock
New research shows that the circulatory system in dogs' paws may be uniquely adapted to help them tolerate cold better than people.

Once it snows, my dog Iris, a Shiba Inu, simply refuses to come inside. No amount of wheedling, bribery or waving of perfect squeaky toys can distract her from the giant snow globe inside my fence.

She’ll even tolerate the humiliating jingle-bell collar if it means more time dashing through the snow. What she won’t concede to, though, is wearing booties.

It’s easy to see how thick, furry coats help keep dogs warm. But their paw pads don’t offer much in the way of insulation. How can dogs essentially go “barefoot” in the ice and snow when humans require heavy wool socks and insulated boots?

Think about it. If people walked in the snow barefoot, the blood vessels would constrict, redirecting blood away from the skin to help conserve core body heat. With less warm, oxygenated blood going to the skin's surface, the foot tissue could become white, numb and eventually freeze.

But that doesn’t seem to be the case in dogs. Research now shows the circulatory system in dogs’ paws may be uniquely adapted to help them tolerate cold better than people.

The Advantages of a Dog's Cold Feet

In the 1970s, researchers wondered how foxes and wolves could hunt on their feet for extended periods, despite bitter temperatures. They found that even when immersed in a minus 31 degrees Fahrenheit bath (yikes!), foot temperature remained about 30.2 F.

That’s just warm enough to prevent tissue from freezing, but cool enough to help limit the amount of body heat lost through the paws. Researchers suggested that an infusion of blood to the paws helped keep them from getting too cold.

How the Core Stays Warm

Recently, researchers at Azabu University inJapan set out to see if modern-day dogs share similar paw features with their arctic counterparts, given that many domesticated canines can be traced back to wolves.

In simple terms, the veins in these locations run parallel to the arteries. As the arteries carry warm blood from the heart to the paw, heat is transferred to the neighboring veins. Since the arterial blood is cooler when it reaches the paws, less heat can be lost through the paws to the environment.

In the same way, cool blood entering the veins in the paw is warmed as it returns to the heart to help conserve heat and keep the core body temperature up. In other words, dogs may have cold paws, but, as we all know, they also have warm hearts.

This unique circulatory design is not found in cat paws, which led researchers to assume that cat feet may be more vulnerable to cold temperatures. And, of course, even the heartiest of winter-loving dog breeds shouldn’t be left outdoors for long periods of time in freezing weather, because all dogs can be vulnerable to hypothermia and frostbite.

Should I Still GetFoot Protection for My Dog inthe Winter?

The recent research from Japan helps explain how dogs are able to walk around barefoot in winter, but it doesn’t mean every dog is suited to have his paws on the ice for long periods of time, which is why it is important to be careful. Winter footwear serves several purposes, ranging from providing additional foot insulation to preventing ice balls from collecting on the fur between foot pads and protecting against potentially toxic deicers on sidewalks. Even dogs in the grueling Iditarod race across Alaska wear booties to prevent abrasions caused by ice and snow.

So winter booties for dogs are still a good idea. That is, of course, if you can get your dog to wear them.