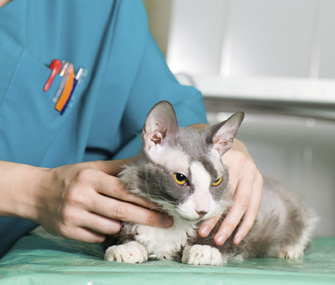 In July of last year, a young couple brought their two Greyhounds to see me at the clinic. Joel, the 11-year old dog, had begun coughing over the last few days. (Toast, Joel’s faithful companion, came along for moral support.) The couple and I talked about how the dogs were doing, and possible causes for this mild but persistent cough. As I examined Joel, our conversation drifted to work, married life and local restaurants. The room was full of smiles and laughter. Then I put my stethoscope on Joel’s chest.

To avoid alarming Joel’s owners, I simply said, “I don’t like the way Joel’s lungs sound. Let’s take some X-rays to make sure everything’s OK.” They agreed, and I led Joel from the room as Toast looked on warily.

When his x-rays appeared on my computer screen, my heart sank. Joel’s lungs were full of soft-tissue nodules. He had metastatic cancer.

What followed was a painful and emotional conversation that I have had far too many times. I began by displaying the x-rays so I could explain my findings to Joel’s unsuspecting owners. The first thing I said was, “I’m afraid I have some bad news to share.”

Twice this week I have talked with pet owners who just learned their pets have cancer. In both cases, the first question they asked me was: “What do we do now?”