Fancy That: How a Cat Breed Becomes Official 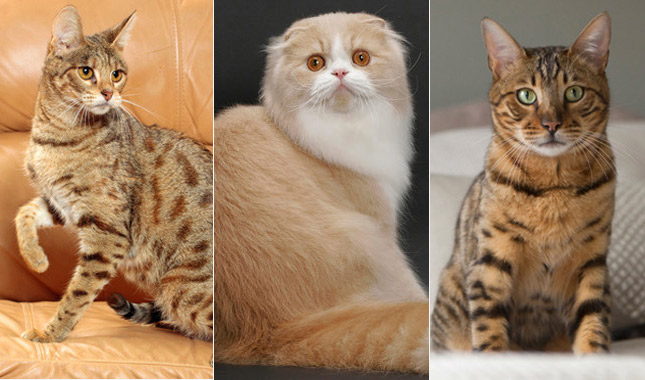 Not long ago, Patti Thomas, a breeder of Virginian Sphynx and Devon Rex cats, realized that two kittens in her possession might represent an entirely new type of cat. Their fur had an unusual, spotty growth pattern with partial hairlessness, especially around the face.

She passed the baton to another breeder, Dr. Johnny Gobble (a veterinarian of 18 years) and his wife Brittney, who — via a separate contact — discovered two more kittens of the same type in another part of the country.

They were onto something.

The unique cats were dubbed “Lykoi” (Greek for “wolf”) and nicknamed “Werecat” because of their uncanny resemblance to werewolves — a contrast to their lovable, social demeanor. (Lykoi do not turn dangerous at night!) Describing the animals, Gobble explains that they have a coat color pattern called “roan”: “The normal coat has white hair intermixed.[It] looks wirelike but is actually very soft and silky. Generally, roan exists in horses, dogs and guinea pigs, but not cats.”

The breeders introduced the male from Thomas’ sibling pair and the female from the other pair and, in September 2011, the first intentionally bred ugly-cute Lykoi kitten was born. It was named Daciana Dream.

Still, despite the fact that there are now 18 breeders working with the felines, the Werecat has yet to be considered an actual breed. It must first be recognized by one of the preeminent cat governing organizations — in this case, The International Cat Association (TICA), established in 1979. That process can be arduous, to say the least.

“It takes a minimum of five years to reach championship status with TICA,” explains Gobble. (Champion status means that a breed has been officially recognized and is permitted to compete in cat shows à la the more well-known Westminster Kennel Club Dog Show.) “We have been working for over three years, and we have only 19 cats that meet the [Lykoi] standard we have recorded with TICA.I have spent lots of time and money managing the breeding program, testing for diseases, placing cats that are not our standard [in happy homes] and [maintaining] general care.”

As Gobble can attest, depending on the organization and even the country, breeders have to jump through different — but always multiple — hoops over the course of many years to establish a cat breed. Ultimately, breeders do this simply for the sense of satisfaction, and though they are required to display the cats at shows as part of the breed certification process, they may not compete for championship honors or financial prizes until the cats have been officially recognized.

“It takes a lot of work,” says Joan Miller, chairwoman of the Cat Fanciers' Association’s Outreach and Education Committee. Miller was on CFA’s board for 25 years and has served as vice president of the organization, which was established in 1906. “The breeders have to travel with their cats, and they can’t accept rewards. It’s fun, but it’s difficult. They do it for the promotion and preservation of the breed. And in the end [when the breed becomes official], there’s a big celebration.”

As it turns out, establishing a feline breed can be as complicated as the enigmatic creatures themselves.