You might know that the German Shepherd Dog is the second most popular dog breed in America, but do you know what the most popular names for this breed are? We do!

We combed through our database of nearly 800,000 German Shepherd names to see which monikers came up most often. While a few weren't too surprising based on what we saw in our most recent list of the most popular names for puppies born in 2015, we think a few of the results are noteworthy. 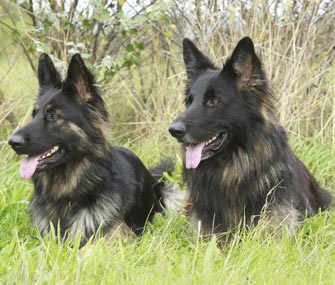 Nick Ridley, Animal Photography
We studied our database of nearly 800,000 German Shepherd names to find out which monikers are most popular for males and females.

Now, let's take a look at how this list compares to the top puppy names of the year.

Lining Up the Ladies

There were, however, some German Shepherd names that didn't crack the 2015 top puppy names list, but do seem particularly fitting for the breed, including Sasha (No. 3), Sheba (No. 4) and Heidi (No. 6).Sasha means "defending men," which is certainly something this working dog breed is known for. Sheba means "oath," which may be a nod to the breed's faithful nature. Heidi, a popular German diminutive for Adelheid, means "of noble birth," which certain applies to this storied breed.

There was a bit more overlap — six shared names — between the most popular male German Shepherd names and our 2015 puppy names list. Max took the top spot on both, which is fitting for the GSD, asthe breed was created in the 19th century primarily by Captain Max von Stephanitz, who wanted to develop a dog that could be used for military and police work.

Rocky was No. 5 across the board. Bear, the second mostpopular name for GSDs, is the No. 7 popular puppy name. Buddy, No. 3 for German Shepherds, was just one spot lower on the popular puppy names list. Duke, No. 4 for GSDs, is two spots lower on the overall puppy list, and Zeus, the No. 8 German Shepherd name, is No. 9 among puppies born in 2015. 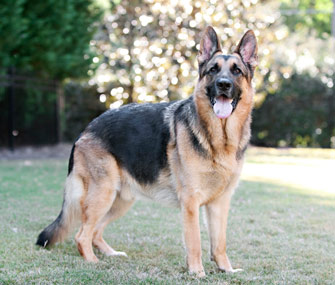 Leesia Teh, Animal Photography
Max, the most popular name for male German Shepherds, was also the No. 1 name for male dogs overall (of any breed) in 2015.

Popular German Shepherd names that didn't quite earn top 10 status with puppies born this year were Jake (No. 6 for GSDs), Shadow (No. 7), Jack (No. 9) and Rex (No. 10). A few of those popular names might sound a bit familiar if you caught our popular Labrador names article — as Jake, Jack and Shadow were on that top 10 list, too.

There are several GSD names that seem to be a great match for the breed. Shadow refers to the breed's protective and loyal nature, as he can often be found right by his master's side. And Rex, which means "king," is clearly perfect for the German Shepherd, as some owners swear he's the ruler of all he surveys.

Got a German Shepherd with a name you love? Let's hear it in the comments!