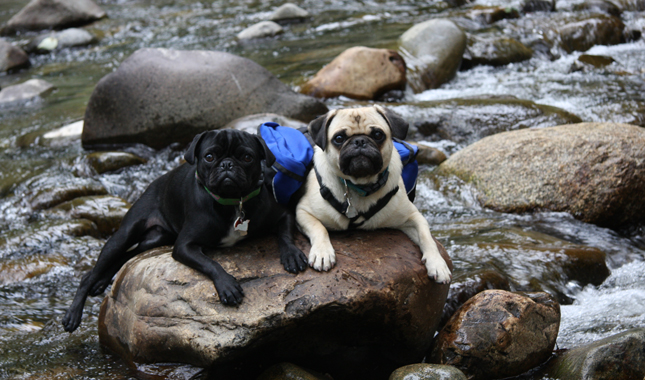 When our veterinarian delivered the news that Bruce’s cancer was back and that he most likely had only a few days left, I was devastated. But through the sadness and dread, I was aware that I wasn’t dealing merely with my own grief. As a family, we would all be affected by the loss, especially Bruce’s best Pug friend, Willy.

While everyone understood my desire to prepare my 6-year-old daughter, Reagan, for her Pug brother’s death, some family and friends were baffled — even dismissive — of my concern for Willy. But I knew that it was important to think about his feelings and how he would grieve for Bruce.

Since puppyhood, we had always referred to Willy and Bruce collectively as “the Pugs” or “the boys.” They did everything together. On walks, they would bump sides every once in a while in a kind of doggy high-five, as if they were reassuring themselves that they were both still right there. Bruce would often add an exuberant lick of Willy’s muzzle before they bounced apart. When they slept, the Pugs didn’t just lie next to one another, they snuggled close together, stuffing themselves into a single dog bed or squeezing into a small corner of the couch — often with Willy sprawling on top of Bruce. The two of them were distinctly different in appearance and personality, but they meshed together in the most complementary fashion. Their friendship was truly unique.

It was no surprise, then, that the change in Bruce’s health appeared to be noticeable to his best doggy friend. The Pugs remained extremely close in those last days, but as Bruce began to fail, they became less physically attached. Willy took extra care around Bruce; rather than licking Bruce’s face when he was excited, Willy would stand calmly next to his buddy, close but not touching him.

At night, Willy opted to lie beside Bruce rather than on top of him when they slept. But as the days went on, the boys had to give up sharing a bed; Bruce required extra space for his aching body, and he was unable to make it through the night without an accident. Willy seemed to understand and readily adjusted to the new routine of bedtime in separate areas. Though it was sad to see these two friends apart, I knew that these small separations were helpful in preparing Willy for the day when Bruce would be gone.