All of the Almost Heaven dogs seemed a little sad that evening, but Willy was without question in a state of mourning. He acted listless and lifeless. Unlike earlier in the day, when he had been playing and running, he now had no energy at all. Reagan and I snuggled with him that night, reassuring him that he wasn’t alone and that we loved him very much.

For the next few days, my grief over Bruce’s passing competed with worry about Willy’s continuing lethargy. He was reluctant to get out of his dog bed or seek social interaction. He didn’t want to play; instead, he would rest quietly beside Reagan or me. He refused to eat, taking only what Reagan and I hand-fed him, and even then it seemed that he ate only as a courtesy to us. I honestly began to wonder if he was suddenly going deaf; instead of attending to everything I did and said, he acted as if he couldn’t even hear me. It was clear to me that he was grieving.

There were little moments of joy though, when Willy would find temporary solace in an activity with us: enjoying a treat by candlelight during a power outage or celebrating his ninth birthday with frosted dog cookies and made-for-dogs Star Wars toys. For the most part though, Willy spent his time snuggled in our laps or in his bed.

Even as Willy mourned, I knew I had made the right choice when including him in Bruce’s death. Not once after Bruce’s passing did he appear to search for him or act as though he was waiting for his return. Willy seemed to understand that Bruce would not be coming back.

Moving On but Never Forgetting 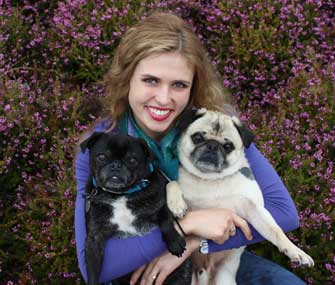 Credit: Mikkel Becker
Losing Bruce (right) was hard for his human family — but it has been just as difficult for his Pug bestie, Willy.

After the first week, Willy began to return to normal. His posture became more alert and happy, and he began to eat without prompting. He slowly regained his excitement about life, expressing his normal zeal for walks, engaging with his canine playmates and smothering his favorite people with affectionate kisses.

Two weeks after Bruce’s passing, we took Willy to see Santa Claus at the Doggy Haven Resort. I’m not sure what it was that cheered his little Pug heart during that outing — perhaps it was giving kisses to Santa or posing for pictures — but somehow, the magic of Christmas settled into his spirit. When we returned home, Willy acted like himself again. He got the “zoomies” and began racing around our living room, play bowing, yipping and zipping past us. I laughed so hard I cried, as he repeatedly galloped toward Reagan and me and then, at the last second, swiveled midair to tear off into another room. Willy hadn’t acted that gleeful since he was a pup. In that moment, I knew that as much as he — and all of us — missed Bruce, there would be joy in our lives again.

In the heartache of losing Bruce, I have learned how profoundly capable dogs are of love. I live in the hope of one day again seeing Bruce, and I know that because of him, my ability to love and have compassion for others has grown immeasurably — and that Willy’s has, too. I am reminded daily of the incredible love Willy and Bruce shared with each other and with our family. Because of their example, I find myself giving thanks, even in my grief, for how richly blessed I am.