Home ›
Our Pet Experts ›
Dr. Donna Spector ›
What Is Wrong With My Snotty Kitty?

What Is Wrong With My Snotty Kitty? 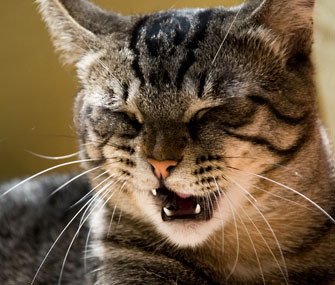 No one likes having a stuffy nose — it is impossible to smell your food, hard to sleep and generally pretty miserable! The medical term for a stuffed-up nose is rhinitis and it is fairly common for cats to suffer from both acute and long-standing (chronic) rhinitis.

Cats with rhinitis often experience some degree of nasal discharge, sneezing and/or loud “congested” breathing. Some affected cats may paw at their face, have deformity of the nose or only be able to breathe through the mouth. Discharge may be from one side of the nose (unilateral) or from both sides (bilateral). Nasal discharge may be clear, cloudy with mucus, pus-like or bloody in nature. All of these observations can help your veterinarian get to the bottom of the problem to help ease the sniffles in your cat. Keep in mind that certain cat breeds — such as Himalayan and Persians — have a “pushed in” face structure that often causes them to sound a bit more “snuffly” than other breeds. While this is generally not cause for concern, you should ask your veterinarian if you have questions.

Here is a quick rundown of what I see as the top 10 causes of rhinitis in cats:

Fully 90 percent of acute rhinitis in cats is caused by the highly contagious herpes and caliciviruses. These viruses are common in young cats, cats in boarding and shelter environments and newly adopted cats. The discharge is usually bilateral, clear or cloudy and is frequently accompanied by discharge from the eyes as well as fever. While the initial viral infection is usually short-lived and may resolve within seven to 10 days, cats may become chronic carriers of these viruses and be more likely to have recurrent signs in the future.

Most nasal bacterial infections are secondary to some other disease process (i.e. foreign body, viral URI, nasal polyp, etc.). Although primary bacterial infection is uncommon in cats, it does occur and Bordetella, Mycoplasma and Chlamydophila bacteria species are the most common culprits. The expected discharge would be bilateral and often pus-like in nature.

Environmental fungus is capable of infecting both indoor and outdoor cats and Cryptococcus infection is the most common. Fungal infections may cause asymmetry of the face and nasal swelling and the discharge is usually unilateral and pus-like or bloody in nature.

Nasal parasites are very uncommon in cats. Outdoor cats may become infested with botfly eggs (called Cuterebra) when they stick their head into or sniff around small animal burrows. If botfly eggs hatch into larvae within a cat’s nose they can cause significant pus-like or bloody unilateral discharge and cats often paw severely at their face.

It is quite common for cats to have blades of grass, seeds or even grass awns lodged in the nose. An acute one-sided discharge, often accompanied by pawing at the face and severe sneezing, could indicate a nasal foreign body.