Home ›
Our Pet Experts ›
Dr. Wailani Sung ›
Why Does My Cat... Kick Litter Out of Her Box?

Why Does My Cat... Kick Litter Out of Her Box? 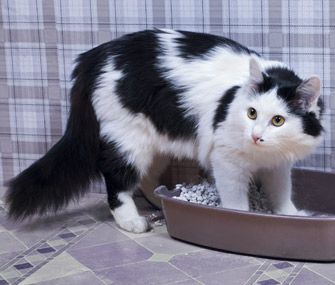 Thinkstock
If your cat always kicks litter out of his litterbox, it could be a sign that the box is too small or the sides are too low.

Does your cat sometimes fling litter out of her box like party confetti? If so, there are usually some very simple reasons why.

Let’s consider normal feline elimination behavior. When cats eliminate in the litterbox, they typically follow a certain behavior pattern. First, they may inspect the litter material. Next, they may dig a shallow depression. Then, they eliminate. Afterward, some cats may try to cover their deposits. This is when they tend to get enthusiastic about the job and throw litter all around the box — and sometimes even outside the box.

If the sides of the litterbox are low, it is common sense that litter material may get “kicked” out of the container. The standard litterboxes we provide for our cats do not always take into account the full extent of a cat’s behavior when eliminating.

Think Outside the Box

Wild cats exhibit the same behaviors as pet cats, but they do not have to deal with the constraints of a litterbox. I used to study feral cat behavior and observed numerous cats as they went about their business eliminating on a dairy farm. On the farm, where the cats were exposed to many “litter” substrates, they tended to dig in the finer substrates, such as sand and dirt, but they did not do this in grass or gravel. They were also able to fully extend their legs to rake the desired substrate, which they are usually unable to do in commercial litterboxes. Cats tend to spend more time manipulating the substrate they prefer.

If your cat always kicks litter out of his litterbox, consider getting one with higher sides. Or you can make your cat a larger litterbox by using a large plastic storage box with high sides (the ones I use are about 12 inches high) and cutting an opening in one side to allow easy access. This is also a good option for a cat who has joint problems or other mobility issues—just make sure there are no sharp cut edges thatcould cause injury.

Some cats may also need a transition period, so leave the old box next to the new for one to two weeks, until you see the cat using the new box more frequently. Then you can remove the old box. You should also try to pick a box that is at least one and a half times the length of your cat from the tip of her nose to the base of her tail. Most traditional litterboxes are much smaller, so it’s no wonder if your cat is tossing some litter over the side.