Home ›
Dr. Marty Becker ›
How Can We Move Our Cats Cross-Country?

How Can We Move Our Cats Cross-Country? 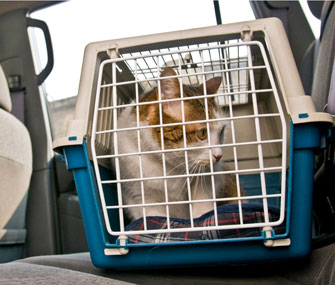 Q. We are planning to send our two cats from New York to Florida; we're driving, but they will be flying cargo. We found a service in New York City that will board them until we get to Florida and then take them to the airport, but it's very expensive. We don't want them getting there before we do, though. What's the best way to get them to our new home?

A. I would probably go with an option you haven’t listed: Rather than sending the cats cargo, fly to Florida with them, in the cabin of the plane (rather than sending them with the luggage). The rub here is that you would need two people to fly, since airlines typically only allow only one carry-on pet per passenger. If you have a friend who is willing to help, though, you could book a round-trip for the friend to fly with one of you (and carry the second cat) while the other drives as planned. Alternatively, the two of you could fly down with the cats and pay someone to take your car to Florida.

I’m not sure what the cost of this would be compared to boarding both cats and then having them shipped as air cargo, but I suspect it might be pretty close to even. Be aware, though, that airlines do charge an additonal fee to take a pet as a carry-on (JetBlue, for example, charges $100 per pet). And, of course, there’s the cost of the airfares, plus the expense of getting your car to Florida, particularly if you have to have it shipped or driven for you. But the advantage of taking your pets as carry-ons is that they never leave your control. While the airlines actually have a pretty good record of getting pets sent as cargo to their destinations safely, that will surely be of no consolation if one of your cats dies or goes missing en route.