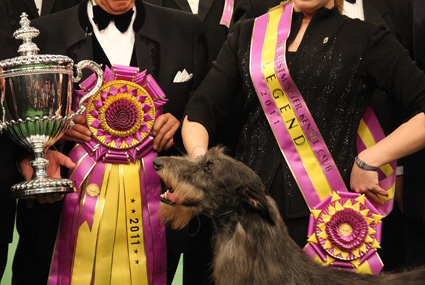 With the Super Bowl (and the halftime Puppy Bowl) played out, it's time for the next blockbuster sporting event of the season: the Westminster Kennel Club Dog Show.

Much like their human counterparts, these four-legged competitors have trainers and coaches with their own strategies and techniques to help their stars shine on the famous green carpet at Madison Square Garden.

More than 300,000 pups have practiced their paws off to impress the sharp-eyed judges since the first show took place in 1877. As you can imagine, a lot takes place behind the scenes of this venerable event.

So we decided to get the scoop on some inquiring-mind questions from show chairman Thomas H. Bradley, 3d; Westminster Kennel Club Dog Show cohost David Frei and handler Clint Livingston, who's made it into Best in Show five times.

Q. Why is the show always held in the frigid month of February?

A. “It is an open date in the national dog show schedule — if we move the date, it will conflict with other shows,” explains Frei. Factor number-two is the rental availability of Madison Square Garden. Lastly, “with this timing, it becomes a logical conclusion to the dog show year, as well as a launch point for the upcoming year,” adds Frei.

A. “It depends on the breed standard, since some are more one-on-one breeds than others. But the dogs do generally enjoy seeing each other,” says Livingston. To which Frei quips, “Do you like everyone you meet?”

“My experience is that dogs recognize their own breeds and tend to get more excited when seeing them,” adds Livingston. “I've shown Cavalier King Charles Spaniels for almost 18 years, and that breed is probably where I see the most 'same breed' recognition. They get so excited to see another one of themselves, especially if they haven't seen another Cavalier King Charles in a bit.”

Q. How do you keep the dogs from getting anxious in the ring?

A. “Not being nervous in the show environment is one of the keys to a dog being successful,” says Livingston. “Some dogs might start that way, but with socialization and training, you hope to get them over that issue. There are multiple breeds in which the standard calls for the dog to be aloof or more persnickety, like Afghans; in those cases, their nerves are considered acceptable by the judges."

Q. Is there a specific dress code for handlers?

A. “There is no dress code, per se, but it is the crowning event in our sport — and it's broadcast on live national television — so they want to look good,” says Frei. “I feel the key is to look sharp and professional, without ever distracting from the dog at the end of your lead,” adds Livingston. “I've always worn a tuxedo for Best in Show.” 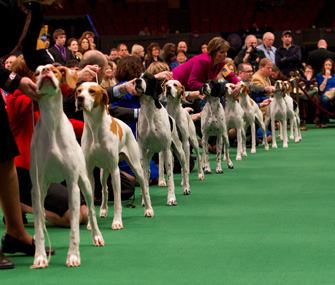 Q. Does a dog who misbehaves in the ring lose points?

A. In addition to being judged against the breed standard, dogs are also assessed on the performance that they give that day.

“Show dogs aren't expected to be robots, and most judges can be forgiving of a misstep or miscue — as long as they see them do it right as well," says Livingston. "However, if it is close between two dogs, the one misbehaving will most likely lose to the one showing better."

Q. Do handlers tend to have good luck rituals?

A. “Handlers are like many athletes — they may have their own superstitions for their dogs, and their own actions in the ring,” says Frei. “I personally carry my lucky comb in my pocket, which I won at Crufts in 1988,” says Livingston. “I also have certain leads for certain dogs for every show that we attend.”

Q. Why isn’t there a talent portion of competition?

A. "The talent portion has to be done in the judge’s mind — they must be able to envision the dogs doing the jobs that they were bred to do," says Frei. After all, it's not practical to provide herds of sheep for Canaans to organize or badgers for Dachshunds to battle inside Madison Square Garden.

Q. Why do handlers hold a treat in their mouths before they give it to the dog? Don't they have pockets?

A. “Not all handlers put the bait in their mouths, but I think that when they do, it is more for quick access than anything else,” says Livingston. “Some dogs show more interest when you have it between your teeth, while other breeds don't need to be baited at all.”

Q. How long does it take to groom a standard poodle?

A. The short answer: four to eight hours. "But it really is an ongoing process," says Frei. "Some scissors here, a brush there...."

The Westminster Kennel Club Dog Show Presented by Purina will air February 13 and 14 on the USA Network and CNBC. Click here for full viewing details.

Q. Will you ever stop adding new breeds to the show? And does one sex or breed win Best in Show more often?

A. The American Kennel Club determines when a new breed is added, as opposed to the show. “We are a member club of the AKC, so we abide by their rules, including which breeds are eligible to be shown at Westminster. This year, 185 breeds and varieties are eligible for competition,” says Bradley.