As anyone who has loved a cat can attest, there is something magical about felines. A unique combination of traits and behaviors — from theirlamplike inquisitive eyes to that unusual sneer when they inhale an odor — makes cats a species unlike anything else on the planet. There are so many reasons they are so special. Here are seven of my favorite peculiarities of the feline form. 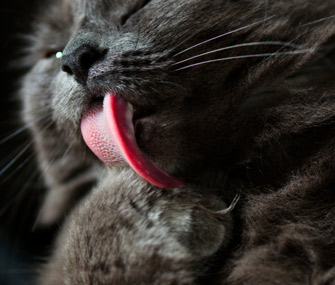 Thinkstock
A cat’s tongue is covered with barbs that help her lap water and remove loose fur when she grooms herself.

When we say someone has a barbed tongue, we usually mean he is liable to dish out particularly sharp criticism. Although this could apply to cats in the metaphorical sense — after all, they don’t have the people-pleasing needs of, say, the average Golden Retriever — a cat’s tongue is literally covered with barbs.

The rear-facing protrusions serve several purposes, such as helping a cat lap water and pull that last bit of meat into his mouth. Most important, the barbs assist in a cat’s grooming by removing loose fur and bits of dead skin. Think of a cat’stongue as her own permanent, in-house brush.

However, the tongue isn’t the only protruding organ covered in barbs. The male's penis is as well. Known as penile spines, the keratinized structures rake the walls of the vagina when the male withdraws after sex, which is thought to stimulate ovulation. Yet another reason to get your female cat spayed!

2. Cats can right themselves when they're falling.

The feline righting reflex is a fascinating ability that allows cats to orient themselves during a fall so that they land on their feet. Though the physics of the motions are beyond the scope of this article, suffice it to say that it is a marvel of angular momentum, inertia and a quick-functioning vestibular apparatus.

The minimum height of a fall for the reflex to kick in is around 12 inches, and a 1987 study of accidental falls published in the Journal of the American Veterinary Medical Association showed that some cats have survived falls from higher than seven stories, possibly because of their tendency to spread their bodies out to increase drag. Think of Rocky the Flying Squirrel, and you’ll get the picture.

Perhaps you thought it was just your cat who seemed to spend most of her day perched in the windowsill. No — it’s all of them. Being a carnivore is hard work, involving intense, brief expenditures of energy to catch prey, followed by long rest periods. Even though most domestic cats chase down nothing faster than a plastic bowl in order to eat, the sleep cycle has persisted.


4. Cats can have whiskers on their chins, cheeks, eyebrows and front legs.

Cat whiskers, known as vibrissae, are touch receptors. They serve multiple functions that help the cat’s body awareness, allowing him to gauge his position in space and whether he can squeeze through a narrow gap. Whiskers should never be cut; a cat without whiskers can become disoriented and less effective at navigating her environment.