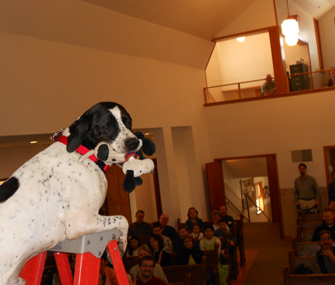 Courtesy of Dr. Tom Rakow
Lost Arrow helps to do a re-enactment before the congregation at Grace Bible Church.

Call them mutts on a mission, whether they're assisting in the pulpit or ministering to the sick across America. They’re known as ministry dogs — and their flock is growing.

Puppies in the Pulpit

Dr. Tom C. Rakow, a pastor for the past 34 years, regularly incorporates his three Pointers into his Sunday sermons at Grace Bible Church in Silver Lake, Minn.

One of the three, Lost Arrow, has his own Facebook page — and a steady gig at the piano, tickling the ivories with his fuzzy paws. He even helps act out Bible stories.

“Luke, Chapter 15, is a parable talking about the lost sheep, and how the shepherd finds it,” says Dr. Rakow.

For the reenactment, the pastor sets up a ladder and hides a stuffed “sheep” in the church during his sermon. When Lost Arrow finds the toy, the dog climbs the rungs to “take the sheep up to heaven,” says Dr. Rakow. “Then the crowd cheers.”

But the pastor isn't just looking for applause when he trots out his fur-covered sidekicks.

“To me, it’s become a tool of common ground,” he says. “Because people love dogs. They help to put things in perspective, and I’ve been comforted by them — I would say providentially — at different times in my life.”

A New Breed of Do-Gooder

It’s not merely faith leaders who own devout pooches.

Mosby — a 3-year-old Golden Retriever named for a Confederate soldier who healed the wounded after the Civil War — loves to accompany his mom, Lynda Fisher, a member of the First Baptist Church in Littleton, Mass., as she makes the rounds at assisted living centers in the community.

Alongside Fisher, the pup ministers to bedbound congregants as old as 92 — and has even been known to disrupt bingo games in progress as distracted players break to give him a pet on the head.

Ministry dogs themselves are a relatively new breed. The idea first got legs when, 10 years ago, a divinity student petitioned NEADS (National Education for Assistance Dog Services), one of the largest assistance-dog training programs in the country, to ask for a dog sanctioned to accompany her when visiting sick children or the elderly. NEADS graduated its first ministry dog in 1998, and has since trained another 15.

Of course, not all ministry dogs come with a strict spiritual pedigree. Most go through rigorous training to become therapy dogs first — then find their calling.

“I adopted a Great Pyrenees,” says Jen Schurman, a member of Southview Baptist Church in Lincoln, Neb. “Part of the reason was I had read that they were wonderful with children but also wonderful therapy dogs.”

For the past three years, she and Skyler have been regulars at Bryan Hospital in Lincoln. Skyler, who’s 100 pounds of dog, will gently lay his head next to a patient or put it in the lap of someone in a wheelchair. He slowly coaxed one autistic child, initially terrified of him, into acting as his leader at obedience training.

Then, four years ago, Schurman’s mother suffered a heart attack and fell into a coma. The day she was taken off life support, as a prayer circle surrounded her bed, Schurman watched in awe as Skyler stood up on his hind legs, stretched his front legs out across her mother’s and laid his head down.

“He had never done that before,” she says. “And he’s never done it since. He knew he was sending her on.”

And Skyler’s spiritual instincts are unerring, she says: “What I see in him is complete and nonjudgmental compassion — a desire to comfort and love without expectation of getting something back.”

And that unconditional support really does seem to be working miracles. “The nurses have told me that the need for PRNs — medications patients take to control episodic anxiety — go down when he’s there,” says Schurman. “I describe him as Valium with fur.”