Home ›
Our Pet Experts ›
Amy Sinatra Ayres ›
After a Loss, the Right Time for a New Dog

After a Loss, the Right Time for a New Dog 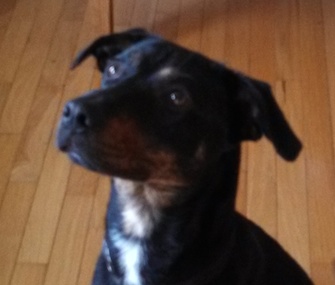 The Thompson family fell in love with their rescue puppy, Baxter, as soon as they met him. But adopting Baxter was no easy decision: After losing the second of their two German Shepherds, it took the family four years to get to a point where they could imagine getting another dog.

Sally, a black and tan Shepherd they'd had since puppyhood, died at age 13; she had nerve degeneration in her hind legs that progressed quickly. Tai, a white Shepherd they’d adopted not long after getting Sally, had passed away a year earlier, at 12, after a more prolonged decline caused by dementia.

For Jane Thompson, it was the emotional part of losing Sally — to whom she felt more connected — that made it tough to think about moving on. “Whatever pet we get, it’s not going to be Sally,” she remembers thinking. “What I really want is her.”

Her husband, Billy, was “down and out,” she says. Although he’d always had a dog, he was worn out from the walks in the heat, rain and snow; the shedding that comes with two Shepherds; and coping with the dogs' declining health, especially with two young children.

But four years after Sally's death, the Thompsons started to reconsider. They always knew they wanted their children to grow up with pets — and they knew that their 5-year-old daughter, an animal lover, would adore having a dog. One night in February, they took a look at the website for their local shelter. Two days later, they brought 9-month-old Baxter, a Doberman mix, home.

“I think we were more ready than we realized we were,” Jane Thompson says.

When you lose a dog, the first question many people ask you is, "When are you getting another one?" But deciding to get a new pet can take awhile — and the right time is different for everyone.

No one would ever stand at a funeral after someone’s spouse died and ask when they planned to remarry, says Coleen Ellis of Two Hearts Pet Loss Center in Indiana. But it’s a question commonly posed to pet owners after a loss.

Though for some people it can be therapeutic to get a new dog right away — or even before their older dog passes — many pet owners need time to adjust.

There are many reasons for needing to take a break, including grief, guilt about the pet’s death, feeling like you would be cheating on your late pet, lifestyle changes since you first got your pet, and even a desire to do the things you may have put off while caring for a sick or elderly animal, like traveling.

“Some people have a terminally ill pet they’ve been dealing with for a very, very long time,” and they may need some space after that, Ellis says.