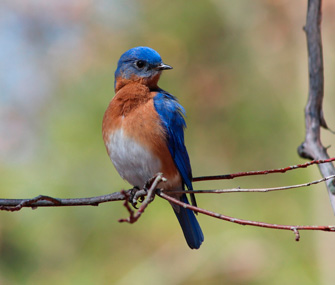 Bluebirds, just like crocuses and daffodils, are a true harbinger of spring. In many parts of the country, that unmistakable flash of bright blue as the birds busily begin setting up house for the season is like spring’s own calling card saying, “Here I am!”

While it is not uncommon for bluebirds to overwinter in larger flocks or family groups, we notice them most when they start pairing off and nesting in February and March. The male bluebird – the more brilliantly colored of the sexes – will select what he thinks is an ideal nest site for his indigo lady love. If she agrees, then bluebird home life becomes a flurry of activity. When mating and nesting season begins, we can’t help but spy their bursts of color as they flit from perch to perch, collecting nesting materials first and then food for hatchlings later.

From spring to fall, bluebirds are busy and visible indeed, because the average mating pair will raise at least two and possibly three broods of babies. One of the endearing things about bluebirds is that they will often stay together in family groups — the young from earlier broods will commonly stay with their parents after they fledge, helping to feed and care for their younger siblings.

Why Do We Love Bluebirds?

Bluebird “love” is a well-documented phenomenon.There are dozens, if not hundreds,of associations and organizations devoted to bluebird lore and preservation. Bluebirds themselves make appearances in old-time fairy tales and poems as well as in modern-day songs and films. For instance, Judy Garland sang about happy little bluebirds flying over the rainbow in The Wizard of Oz and wondered why she couldn’t join them, while Henry David Thoreau wrote of how their “soft warble melts the ear.” And who could forget the catchy Disney tune's lyrics that guaranteed us all a wonderful day simply because “Mr. Bluebird’s on my shoulder”?

Dan Sparks, a board member of the North American Bluebird Society thinks people delight in bluebirds so much simply because they are so likable. “They’re just a happy, sociable bird,” says Sparks. “They’ve got a real cheerful nature, a ‘bubbly’ song, and they seem to like to be around people.”

Bluebirds have also been linked to luck, as well as happiness, perhaps largely because of their long tradition of helping farmers. In the centuries before pesticides, many farmers, and even Native Americans before them, would tie up nest boxes made of wood or hollowed out gourds in areas where they wanted bluebirds to set up house. Bluebirds were welcomed because of all the insects they ate.