Home ›
Our Pet Experts ›
An Earth Day Health Check for Our Planet: The Red List of Threatened Species

An Earth Day Health Check for Our Planet: The Red List of Threatened Species 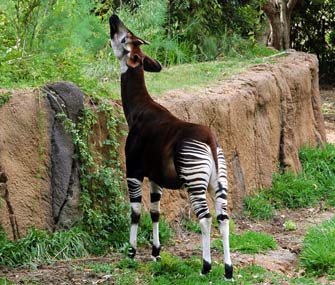 iStockphoto
Topping the list of threatened animal species is the okapi, a relative of the giraffe that's found only in the rainforests of the Democratic Republic of the Congo.

Have you ever heard of the okapi? How about the white-winged flufftail or the red-belly toad? Most likely not, but if the International Union for Conservation of Nature, or IUCN, has its way, you'll be hearing much more about these and other endangered species. According to the IUCN, there are currently more than 21,000 animal and plant species whose existence is threatened. This April 22, get involved in Earth Day by learning more about this important organization and one of its biggest conservation efforts: the Red List.

What Is the IUCN?

Founded in 1948 and headquartered in Switzerland, the IUCN is the world's largest global conservation network. Comprising more than 1,200 member organizations in more than 160 countries, the IUCN monitors, reports and manages the health of the world's plant and animal species. Almost 11,000 volunteer scientists and other experts review the latest research and develop standards to protect the world's natural resources.

The IUCN's overarching goal is to help governments understand how conserving nature ultimately supports their country's people. By combining the latest science with specific knowledge about local communities, the IUCN works to protect ecosystems, bring back lost habitats and improve the well-being of people around the world.

One of the largest efforts of the IUCN is its Red List of Threatened Species, a comprehensive inventory assessing more than 71,500 plant and animal species. Updated yearly, the Red List helps guide conservation efforts by providing information about population size and trends, geographic range and habitat requirements of each species.

Its latest report, released in November 2013, labeled 21,286 species as "threatened" with extinction. This category is broken down into vulnerable species (10,549), endangered species (6,451) and critically endangered species (4,286). Threats to individual species vary widely, but can include destruction or loss of habitat, hunting, the introduction of new local predators as a result of human activity, and economic conditions in a given area.

Topping the list of threatened animal species is the okapi, which looks like a mix between a zebra and a horse but is actually related to the giraffe. The okapi population, found only in the rainforests of the Democratic Republic of the Congo, is dwindling dangerously, largely as a result of poaching and habitat loss.

Among the nearly 200 species of birds that are considered critically endangered is the white-winged flufftail, a small, secretive bird seen in parts of Africa. Its decline has resulted from deterioration of the bird's habitat thanks to overgrazing by livestock, wetland drainage and removal of marsh vegetation. 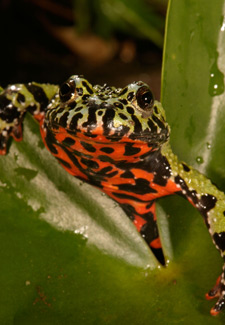 Alamy
The red-belly toad is threatened by a hydroelectric power plant installed along the river near where the toads are found in Brazil.

Another bird that has seen massive population and range decline in recent decades is the red-headed vulture. Native to parts of Asia, this avian species is now critically endangered, likely as a result of feeding on thecarcasses oflivestock that had been treated with diclofenac, a drug that is toxic to vultures.

Native to a very small area in Brazil along the Forqueta River, the red-belly toad also makes the critically endangered list. This species' rapid decline has been the direct result of a new hydroelectric power plant that was installed along the river near where the toads are found.

In the United States, the New England cottontail population has declined by 50% since 1994. Destruction and fragmentation of this rabbit's habitat has largely resulted from urbanization/suburbanization as well as industrial development throughout the region.