Black Cat and Dog Myths Around Halloween, Adoption and More 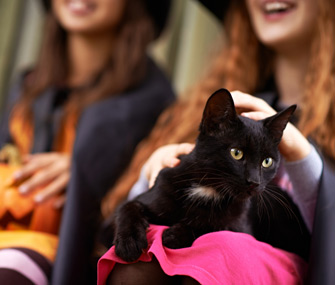 With Halloween on the horizon, it's a great time to talk about pets — black pets in particular. Here's why: Blackness is a common point of stress for those who keep black pets and love them.

After all, conventional wisdom dictates that the witching season is none too friendly a time for pets whose coloration has traditionally been feared and shunned. Superstition, it's long been supposed, translates into mischievous behavior leveled against the darkest dogs and cats in our midst.

And yet, there are those who feel that our fear for their safety at this time of the year is less warranted than we've traditionally believed. They say black pets are not truly the targets of our communities' wrath. At least not so much as we'd formerly assumed.

And that’s a good thing, for sure. But is it an apt reflection of reality... or just wishful thinking?

Since I didn't know the answer I did what any other self-respecting ignoramus would: I googled it. But after a brief search, I'd uncovered only the expected — ardent exhortations urging pet owners to beware. Black cats, especially, these sources urged, should not be left out during this time of the year. What's more, they should be carefully guarded lest Satanic cults target them for sadistic ritual murders.

But surfing further down on the list of hits revealed some contradictory information more in line with those who say we make too much of the black-pets-as-pariahs thing.

Turns out Snopes.com and other fact-checkers have come to the conclusion that there's little evidence to support modern rumors of mutilation and generalized bad behavior perpetrated against black pets during this time of year. In fact, you'll find no stats to indicate a higher incidence of any kind of animal abuse during this time of the year, be it against black, brown, white, calico, tan, tabby, buff or brindle.

Halloween may breed mischief, but not against pets — much less against black pets in particular. Nonetheless, the misperception persists that black animals are singled out for discrimination... and not just during Halloween.

"Big black dog syndrome" is what some shelter workers call one version of this kind of bigotry. According to these firsthand observers, there’s something that makes us more likely to cringe when we see a big black dog headed our way. And small dogs along with black cats, it's supposed, are likelier to earn a wary look than their nonblack counterparts.

If true, this phenomenon has implications for more than your stress level. Indeed, for years it's been claimed that adoption rates at shelters are significantly lower for black pets than for others.