Home ›
Our Pet Experts ›
Colleen Oakley ›
Can You Hear Me Now? Study Finds Whales May Have Natural Ear Plugs

Can You Hear Me Now? Study Finds Whales May Have Natural Ear Plugs 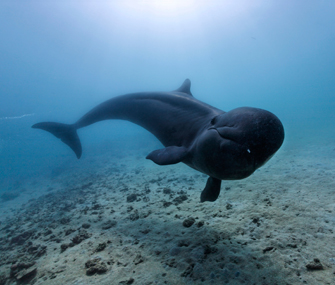 Firecrackers, gunshots, popped balloons — it’s no secret that loud noises can cause damage to your eardrums. Fortunately, humans have hands to clap over their ears to muffle these sounds. Whales, who depend on their hearing for navigating dark ocean waters, aren’t as lucky.

But a new study from the Univesity of Hawaii has found that marine mammals may have a way to protect their ears from high-decibel noises — without using their fins.

Researchers working at a floating facility off Coconut Island at the Hawaii Institute of Marine Biology repeatedly played a short warning sound followed by a loud sound for a false killer whale. Through brain wave measurements, they found that the whale began to significantly adjust its hearing receptivity when the mammal heard the warning signal.

Scientists aren’t sure exactly how whales adjust their hearing sensitivity, but they’re hopeful that marine mammals in the wild may be able to quickly pick up on warning signals — and turn down the incoming volume, lessening the harmful effects of human-created ocean noises from things like oil exploration and ship sonar.