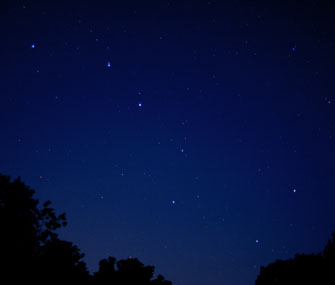 Thinkstock
Numerous animals have connections to the Big Dipper, including bears, caribou and even reindeer.

Before artificial light was invented, our ancestors could see a lot more stars in the night sky than most of us can today. They also had a lot more time to spend gazing skyward, and since they lived so closely with animals, a lot of what their imaginations found hidden in the stars revolved around critters. Starting today, the planet Venus will pass directly between the sun and the earth — a very rare event that will not take place again until 2117. Inspired by this special cosmic moment, we decided to take a look at some equally unique animal-themed celestial legends.

Of the 88 constellations officially recognized by Western astronomy, 40 are animals — or 43, if you count the mythical ones. These include the goat, fish, ram, bull, crab, lion and scorpion, which should be familiar to most from the zodiac of astrology. But there's also an eagle, dolphin, chameleon, crow, swan, crane, two water snakes, a generic lizard, hare, wolf, lynx, peacock, fox, toucan, flying fish and even a fly.

The Big Dipper is part of a larger constellation called Ursa Major, or the Great Bear. Some North American Indian peoples also see a bear in the Big Dipper, but those residing in the polar regions of North America call it a caribou, reindeer or moose. Across the Bering Sea in Russia, the Chukchi say that the reindeer is tethered to a post, and if you observe the sky at night, you can watch the reindeer pacing around it.

People all over the world see animals familiar to them in the night sky. The ancient Maya saw Pleiades as a rattlesnake's tail, as well as constellations of a jaguar, shark, turtle and peccary. Some Australian natives see the Southern Cross as the foot of a wedge-tail eagle. And the Chinese traditionally saw four animals in the sky at the four points of the compass: a dragon in the east, a bird in the south, a white tiger in the west and, in the north, a tortoise who was sometimes depicted with a snake.

Legends also associate the Milky Way with animals. Its name in Estonian means "bird pathway," and it was believed to be the route that birds used for seasonal migrations. It turns out that there was some truth to it: We now know that birds who migrate at night do indeed use the stars as a navigation aid. Scientists figured this out by putting some indigo buntings in a planetarium, where they could control the stars that the birds saw. The verdict: To determine which way was north, the birds zeroed in on the rotation of the constellations.

Animals have even been credited with designing elements of the night sky. A Cherokee tale recounts the story of a dog who was caught stealing from a mill. When he ran away with cornmeal spilling from his mouth, the trail formed the Milky Way.

There are also various Native American tales in which the coyote created the constellations, and, in some, he's to blame for the fact that they don't really resemble what they should — the impatient canine carelessly tossed the stars up into the sky, instead of placing them carefully in the right pattern.

The Finnish name for the aurora borealis means "fox fires," which derives from a legend that the Northern Lights are created by the tail of a magical fox sweeping snow up into the sky. And one group of Eskimos believed that the aurora was caused by the dancing spirits of deer, seals, salmon and beluga whales.